We’re wasting thousands on cars we don’t even drive Photo by NeONBRAND on Unsplash

New research shows many Australian drivers are wasting thousands of dollars a year on cars they barely use.

According to a survey commissioned by subscription-based car-sharing service Popcar, 72% of Australians spend under four hours a week driving their cars, despite cars costing an average of $7,232 per year to own.

Around half reportedly spend less than two hours a week in their primary car.

After factoring in car loan repayments, Popcar’s research found the annual cost of a typical car in Australia can be around $13,600.

Source: Popcar research based off AAA, AIP, BITRE and the NSW fuel check website and www.fuelprice.io.

The survey also found that 52% of Australians consider car ownership to be a financial burden.

Other results suggested Australians are purchasing cars they don’t need for the sake of convenience or appearance.

The research found eight in 10 car buyers did so in order to get around easily, while one in three agreed that owning a car is a status symbol – this figure increased to 58% among the 18-25 year age bracket.

Dr Parvinder Kler, Director of the Sustainable Energy Policy Cluster (SEPC) at Griffith University, said many Australians don’t consider the long-term costs of owning and keeping a car before buying one.

“The research shows that many Australians feel a heavy financial burden of upkeeping a car and would prefer to save the worry and money associated with car ownership, but it’s often a habit that is hard to break,” Dr Kler said,

“Australians choose car ownership for the freedom and convenience to get around – from the grocery shopping to driving to work.

“However, in reality, Australians are wasting a lot of money on their cars when comparing the cost against how short the amount of time is that people spend driving their cars.”

According to Dr Kler, getting rid of your car is the easiest and fastest way to make big savings on a yearly basis.

“There are many alternatives to traditional car ownership which are convenient and cheaper but there is still work to be done to change the concept of car ownership.”

One such alternative is car-sharing or car-subscription services like Popcar, which give users a car to use in exchange for monthly fees.

Car-sharing involves vehicles being rented out for short periods of time in areas where personal car ownership can prove difficult or too expensive.

It’s a relatively new phenomenon – only 25% of Australians have ever used such a service.

Popcar director Anthony Welsh says car-sharing services aim to offer alternatives to car ownership for people who want to remove the financial burden of owning one by only paying for the car if and when they use it.

“We launched three years ago in Australia, as we saw that we could be ahead of the curve of this new concept which was becoming more and more interesting for consumers,” he said.

“With car sharing, you get the benefits and access of using a car, which is privately-owned and cared for by us, but only pay for what you use.

“Popcar is changing the convention and costs of owning a car and providing Australians with the option to access a different type of pristine car for any occasion.”

How does Popcar compare to other car-sharing services?

The cheapest Popcar plan, used by drivers who drive ‘often’ has a one-off joining fee of $10, plus:

A similar service ‘Carbar‘ – self-dubbed the ‘Netflix for cars’, functions in a very similar way to Popcar, but instead just charges a flat monthly fee starting from $119 per week depending on the car chosen.

Users planning on switching cars can pay a $150 fee at any time.

Other car-sharing or car subscription services currently available in Australia include the likes of Car Next Door, Go Get, FlexiCar and RACV Carshare.

Prices correct at the time of writing

Far fewer Australians are actually buying cars at the moment due to a number of factors, including restrictive lending and worsening economic conditions.

According to the Federal Chamber of Automotive Industries (FCAI), sales of new vehicles were down nearly 10% annually in June, which is historically 30% stronger than other months for car sales thanks to many dealerships running EOFY bargains.

With fewer cars being bought, could it be that more of us are turning to car-sharing platforms such as these? 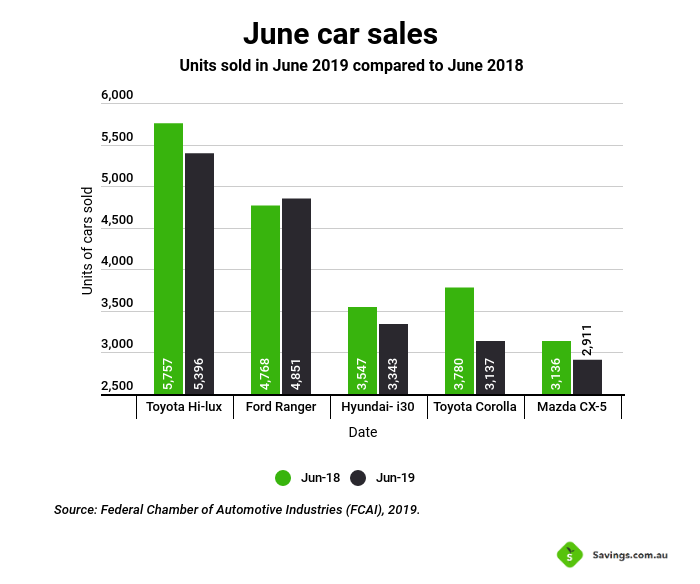