Australians paid off credit card debt racked up over the Christmas period at a record-breaking rate in January.

That's the biggest monthly fall for any January in 27 years of records.

Additionally, the value of purchases made with credit and charge cards fell by 1.5% in January and is now down 7.6% on a year ago.

"A larger proportion of Australians now prefer to use debit cards to help control their finances and for health reasons during the pandemic – with ‘tap and go’ purchases more readily available at stores," Mr Felsman said. 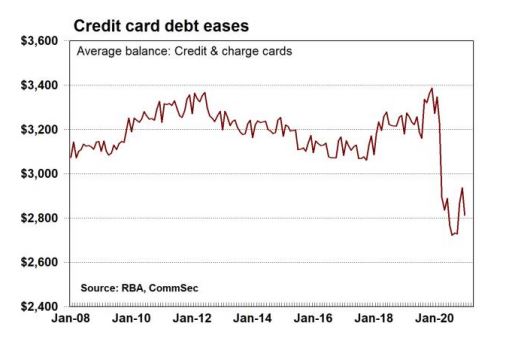 Off the back of financial support from the government through COVID, household incomes and savings rates skyrocketed, with consumers now seemingly keen to be debt-free.

"Consumer confidence has rebounded, but figures released by the Reserve Bank yesterday showed Aussies continuing to use savings amassed during the pandemic to pay down credit card debt," Mr Felsman said.

"Why? The average interest rate on credit cards is around 17.5% using bank-compiled data."

The number of credit and charge card accounts was at an almost 14 year low of 13.55 million in January, down from 13.63 million in December, with accounts down 7.4% on the year.

Credit cards popularity have also been battered by the popularity of buy now, pay later services, a battering that may worsen with PayPal today announcing it was entering the lucrative sector with its 'PayPal Pay in 4' offering.

Debit cards had a soft start to the year, with the number and value of debit card purchases down by 0.5% and 0.9% respectively in January.

ATM usage continued to tumble, with the number of ATM withdrawals in January down 21.2% over 12 months, and the value of transactions down by 12.9%.

According to the weekly ANZ-Roy Morgan consumer confidence survey, consumers' views on 'current economic conditions' rose 3.6% to a 19 month high of 5.3 points.

Meanwhile, the Westpac-Melbourne Institute's monthly consumer confidence released today showed confidence was only marginally below its December 10-year high and is 20% higher compared to March 2020.

Photo by CardMapr on Unsplash