Photo by Thomas Q on Unsplash

Losses on land and dwellings due to ailing property markets have led to the biggest decrease in household wealth in over seven years, data shows.

According to the Australian Bureau of Statistics’ National Accounts: Finance and Wealth data for the December 2018 quarter, household wealth (aka net worth) fell by 2.1% from the September quarter.

This is the biggest fall in household wealth since September 2011, and in dollar terms is a fall of $10,198 per household.

The average Australian household net worth is now $404,320.

This is the average figure, not the median, which means this figure is skewed somewhat by the extremely wealthy.

The median (considered to be a better representation) net wealth per adult in Australia is reported to be around $270,000.

The ABS reports the household losses over the quarter  falling residential property prices.

According to CoreLogic data, national dwelling values have declined by 6.8% since a peak in October 2017, with Sydney and Melbourne hit particularly hard – recording losses of 10.4% and 9.1% respectively. 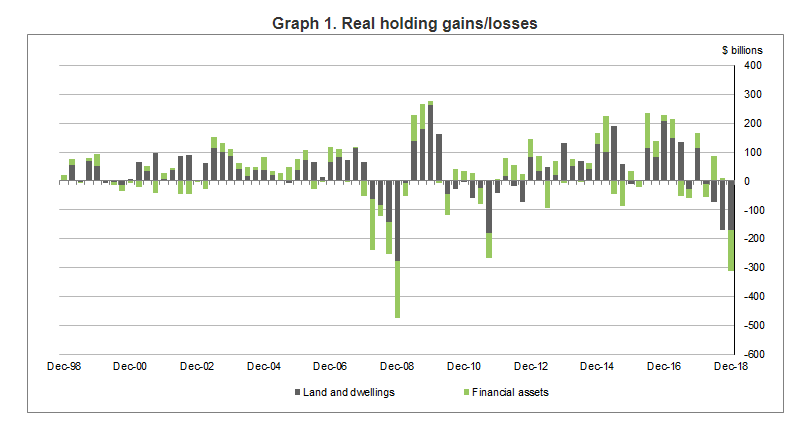 The data also shows Australians are taking matters into their own hands, with household investment reaching a record high.

Households invested $45.9b, up $3.2b from the previous quarter. The rest was investment by private, non-financial corporations. 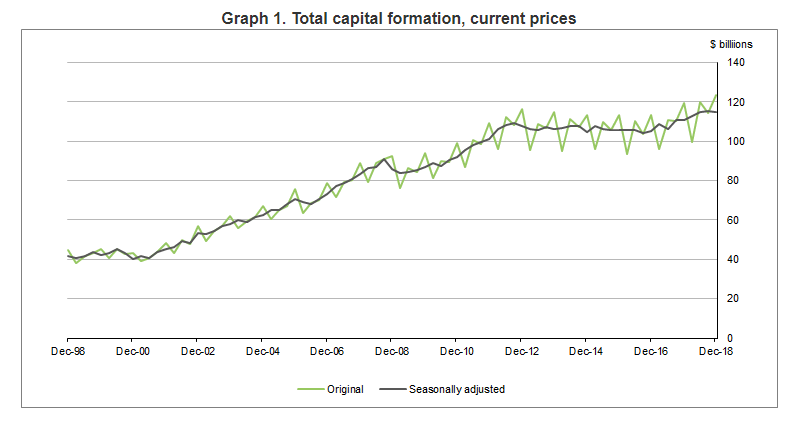 Household gross disposable income fell 2.6% to $312.7b per household from $321.2b in the September 2018 quarter. Again, dwelling value losses and financial asset losses were the primary instigators.

The wealth effect is the change in spending accompanying a change in perceived wealth. When a person’s overall wealth falls – due to a drop in their house’s value or share portfolio, for example – the theory is that people save more and spend less.

The Reserve Bank on Tuesday downplayed the possibility of the wealth effect influencing spending at the moment.

“And because rising housing prices usually occur in the context of high rates of transactions in the market, spending on home furnishings tends to rise and fall with housing prices.”

Ms Ellis then said that fundamentally, the demand for housing rests on the household sector’s confidence and the capacity to take on financial commitments.

“Without enough income, and so without a strong labour market, that confidence and capacity would be in doubt. This is not the only reason we are watching labour market developments closely,” she said.

“But the nexus between labour markets, households and housing are crucial to our assessment of the broader outlook.”