Home / Home Loans / Brisbane rents could rise by $5,000 per year according to this property expert

Brisbane rents could rise by $5,000 per year according to this property expert Tenants in Brisbane are being warned to brace for a budget hit, as low vacancy rates and high demand push rents up.

Brisbane's rental market is about to become "incredibly problematic" according to analysis conducted by property market research firm Propertyology.

Propertyology Head of Research Simon Pressley (pictured above) said the rental market in Brisbane is so tight that asking rents for standard Brisbane houses could increase by as much as $5,000 per year - nearly $100 a week - by the end of 2022.

"There were only 4,520 residential dwellings advertised for rent across Greater-Brisbane at the end of June 2021. That is a massive reduction from 9,222 dwellings five years earlier, when 230,000 fewer people lived in Brisbane," Mr Pressley said.

"The lack of rental supply is a concern. It is highly possible that Brisbane's advertised rents could increase by $100 per week - a $5,000 annual hit to household budgets before the end of next year.”

According to Propertyology, Brisbane's rental supply and demand has remained fairly even over the last 20 years, but the number of investors in the market has been "concerningly low" for several years.

"Pressure was slowly starting to build on Brisbane’s rental market about a year before the arrival of COVID-19," Mr Pressley said.

"And then the psychological and financial impact of the germ prompted an increased desire for some households to want to move.

"The high volume of tenants searching for rental accommodation is akin to seagulls fighting over a chip."

Mr Pressley said the rental market in Brisbane mirrors rental conditions in many other capital cities, describing it as a "perfect storm" of insufficient rental supply at a time when a higher than normal volume of renters are looking to move

According to Propertyology, asking rents for Brisbane houses have already increased from $465 to $515 per week over the first seven months of 2021. 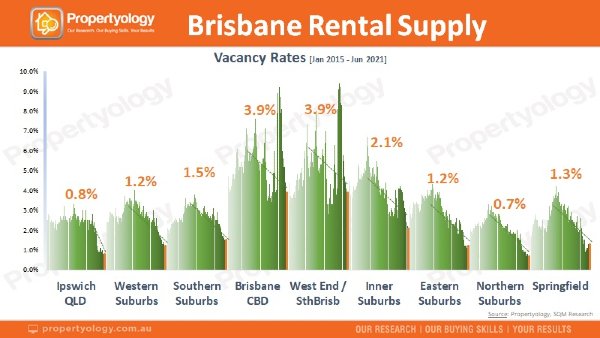 Recent Domain research found the median house rent in Brisbane climbed 12.5% over the past year to $450, marking the strongest rate of annual growth in around 15 years. Apartment rents were also at a 10-year high in Brisbane at $400.

The latest Domain House Price Report, released today, revealed median prices in Brisbane jumped by 13% over the 12 months to June to $678,236 - the largest rise in 13 years.

Domain chief of research and economics Dr Nicola Powell said it's possible Brisbane's median house price will reach the $700,000 mark in the next three months.

"With Brisbane set to host the 2032 Olympics, significant infrastructure investment and associated job creation in the lead up will place additional demand on housing," Dr Powell said.

See also: Why a 2032 Olympics in Brisbane could cause a property 'frenzy'

"With lessons learnt from Sydney and how Brisbane prices have travelled over the past 18 months, it wouldn’t be surprising to see a similar trend," Dr Mardiasmo said.

Read more: What the 2032 Olympics means for Brisbane's property market