The worst is over? Home price downturn continues to slow While Australia’s property downturn spread to other parts of the nation over April, the national rate of decline eased, with the median dwelling value recording the smallest monthly fall since September last year.

According to CoreLogic, dwelling values across Australia fell just 0.49% in April, bringing the median home price to just under $519,900.

National dwelling values are now down 7.9% from the peak in September 2017 and 7.2% over the past year – the largest annual fall since the global financial crisis. 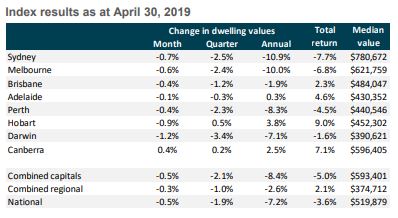 “Further evidence” that the worst is over

CoreLogic head of research Tim Lawless said the slowing rate of monthly declines is largely a result of the easing downturns in Sydney and Melbourne, where prices were previously falling much faster.

Given these easing price declines – as well as rising lending activity, improving household finance data and steady auction clearance rates – Mr Lawless said the current data trends imply the housing market “may have moved through the worst of the downturn”.

“We are seeing further evidence that the worst of the housing market conditions are now behind us,” he said.

“Values are still broadly declining, however the pace of decline has moderated since December last year and there are some tentative signs that credit flows have improved, albeit from a low base.

“While borrowers are facing tougher serviceability assessments and scrutiny around their overall debt levels relative to their income and expenses, lower mortgage rates will certainly be a net positive for the housing market,” he said.

“Mortgage rates are already around the lowest level since the 1960’s and any further reduction is likely to be well received by the market.”

The upcoming federal election, however, could deliver a wildcard for the housing market according to Mr Lawless.

“A change of government could see taxation policies relevant to the housing market rolled back or removed which would be an overall negative for investment demand,” he said.