RBA Assistant Governor Michele Bullock has provided an update on the progress of the new payments platform (NPP), praising the success of its implementation and adoption by smaller institutions.

Speaking at the annual ASIC Forum in Sydney today, Assistant Governor Bullock spoke at length about the progress of the new payments platform, as well improving fraud prevention and increasing debit card competition in Australia.

The NPP, which went live in February 2018 and was designed to allow users to make real-time payments, was described by Ms Bullock as having been a success, and “a very good example of industry collaboration in recent years”.

“The result is that we now have a first-rate payments system infrastructure that will be a platform for ongoing innovation. In many respects, Australia’s fast payments system is at the cutting edge of such systems,” she said.

“The design of the system, which allows for competitive ‘overlay’ services to use the infrastructure, gives the system flexibility to meet the future needs of users of the Australian payments system.”

The Assistant Governor also provided an update on the popularity of the NPP so far.

According to the latest RBA data, there were 16 million NPP payments made in April, worth a total of $13 billion.

By comparison, the latest credit card data for March from the RBA shows more than 246 million credit card purchases worth more than $27.5 billion.

“This is still small relative to the volumes that pass through other retail payment systems,” she said.

“But it is growing steadily and at least as quickly as some comparable overseas fast payment services when they were introduced.”

Australia isn’t the only country to have a similar platform, and as can be seen in the graph below, it’s growing at a faster rate here than it did previously in early overseas adopters Sweden and the UK. 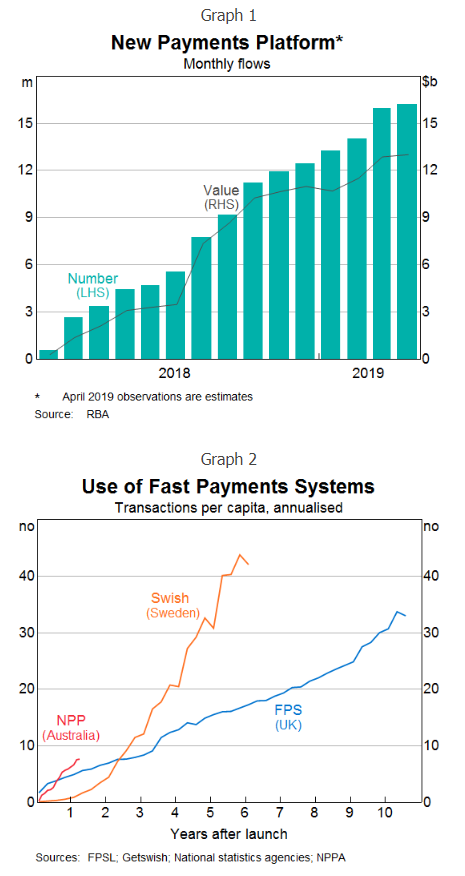 Ms Bullock was complimentary of non-major institutions, saying the number of smaller banks, credit unions and building societies has grown from 50 on day 1 to more than 70 now.

But not for the first time, she stated the RBA was “somewhat underwhelmed” by the progress of the major banks in implementing the NPP.

“Some of them have been much slower to provide their customers with fast payment services,” she said.

“The majors have all taken different approaches to which functionality they will provide and which customers to bring on first. This is their prerogative.

“But with some big banks slow to complete NPP related changes to their internal systems, there remain large numbers of customers that do not have a full range of convenient options for initiating fast payments even if their accounts can be reached by incoming fast payments.”

This comes just a few months after RBA Governor Philip Lowe gave the big four a public lashing about their delays in installing the NPP.

“Late last year I wrote to the CEOs of the major banks on behalf of the Payments System Board, expressing our concerns and seeking a commitment that the updated timelines be satisfied,” Mr Lowe said at the time.

“As we rely less on cash, outages affecting retail transactions can have a significant impact on businesses and individuals. So continued effort needs to be made by all participants in the payments system to reduce operational problems.

“If this does not happen, then it is possible that the Payments System Board could consider setting some standards.”