How wealthy are Australians? For a country that’s still pretty fresh, Australians are already among the top players when it comes to wealth. So, exactly how wealthy are Australians?

When it comes to money, we’ve got it honey. Australia is home to some of the most wealthy adults per capita, and even throughout the pandemic, the number of wealthy people is still growing. In Credit Suisse’s most recent wealth report, Australia ranked alongside Switzerland as a country where wealth per adult has risen the most over the past year.

But what does this actually mean? And why is it important? Ultimately, how rich are Australians, and what does this mean for our future and future generations?

What is Australian household wealth?

The Land Down Under; home to beautiful beaches, dangerous animals, and very wealthy people. The Australian Bureau of Statistics (ABS) measures the average household wealth quarterly. In its last release, it was shown that total household wealth rose 5.8% to a record $13,433.7 billion, and that wealth per capita rose to its record high of $522,032.

But what exactly is household wealth? Well, the ABS says that ‘wealth’ refers to economic resources in the form of the balance of assets and liabilities held by members of a household. Basically, how much money and debt Australian households have.

Wealth per capita essentially means wealth per person. This means that currently, the average person is worth roughly $522,032 as of June 2021. But this is broken down into groups, most recently done in a report by the Australian Council of Social Service (ACOSS) and UNSW Sydney. In this report, data from 2017-18 was used (pre-pandemic) to show ‘who owns what’ by breaking down wealth distribution into three groups: ‘highest wealth’, ‘comfortable middle’ and ‘lower wealth’. 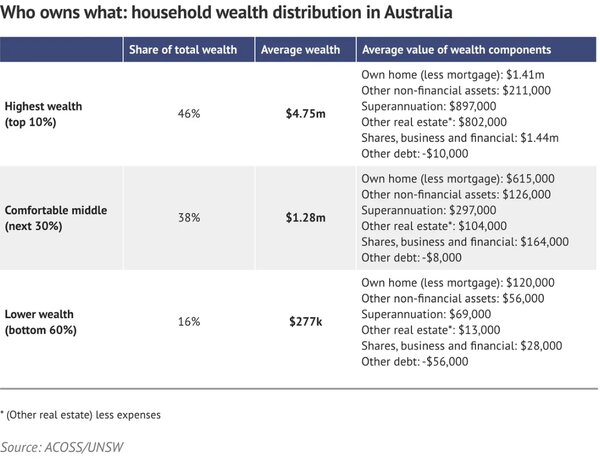 Back in 2018, Credit Suisse ranked Australia as having the highest level of median wealth of any nation in its annual wealth report. According to Michael Marr, Head of Private Bank at Credit Suisse in Australia, this ranking was because of our superannuation system, continuous economic growth, high house prices, strength of the Aussie dollar, and plentiful natural resources.

How much has household wealth risen over the past 33 years?

The wealth of Australians has grown by 302%, or $9.5 trillion, over the past 33 years according to a new report by The Australian Institute. The majority of this wealth is in the hands of people over 55 years old, and comes in the form of property and shares.

“In the coming decades, not only is the wealth of Australians likely to grow rapidly but that wealth will almost certainly flow primarily to those aged over 55,” David Richardson, senior research fellow at The Australia Institute, said.

“Rapid increases in wealth, like the one Australia has already experienced and the one we will likely experience in the decade ahead, are a good problem to have.”

While the rise in net worth has been pretty steady over the years, the pandemic saw the biggest spike in household wealth on record.

How much has it risen throughout the pandemic?

Despite a slight dip in March 2020, household wealth has been on an upward trajectory over the past 12 months. Throughout the last quarter specifically, household wealth rose by 5.8% or $725 billion, which is the largest quarterly growth since December 2009, which was the peak recovery from the global financial crisis (GFC). What’s driven this growth, you might be wondering? Unless you’ve been living under a rock, you probably already know the answer: the housing boom, as well as holding gains in financial assets (super and shares/other equity).

With the majority of Aussies' wealth sitting in these two types of investments (property and shares), it’s no surprise that many people are wealthier than ever.

Specifically, wealth per capita increased 5.6%, or $27,782, per person. This was driven by a $576.5 billion rise in the value of land and dwellings (non-financial assets), with the demand for property remaining ‘strong’ according to the ABS. Additionally, financial assets such as superannuation reserves and shares/other equity rose 3.3% or $206.1 billion over the most recent quarter.

As we briefly mentioned, the pandemic has been good to some but not to all. The divide between high and low income households is widening, with the highest 20% bringing in an average weekly income almost six times the income of the lowest 20% ($4,166 per week versus $753 per week).

Not only are they bringing in more money, their average wealth of $3.3 million is 90 times the wealth of the lowest group ($36,000 on average). In the research conducted by ACOSS and UNSW, they deep dive into the ‘why’ and rank six households at different points of the income distribution scale. This ranges from a single person on JobSeeker (lowest 10%) all the way to a high-income couple with no children (top 5%).

So, the average household’s wealth is definitely going up, but not every person is there for the ride. Not helping the situation is the fact that people relying on JobSeeker are most likely to be in the lowest 10% of households - these are most likely people who lost their jobs directly because of COVID-19.

How do we fare on the global stage?

It’s easy to say that we’re a wealthy bunch, but the real test is how we compare to other countries around the world. Well, we do pretty well when compared to most countries.

According to Credit Suisse’s 2021 wealth report, Australia ranks as second on the scale of biggest gain in wealth over the past year. In US dollars, Australia’s wealth per adult increased by $65,695, which is just below Switzerland’s US$70,729 gain. Below Australia in the top five were Sweden, Belgium, and the Netherlands. Notably, the next country’s gain in wealth per capita was $50,000; so, we are well ahead of the pack. 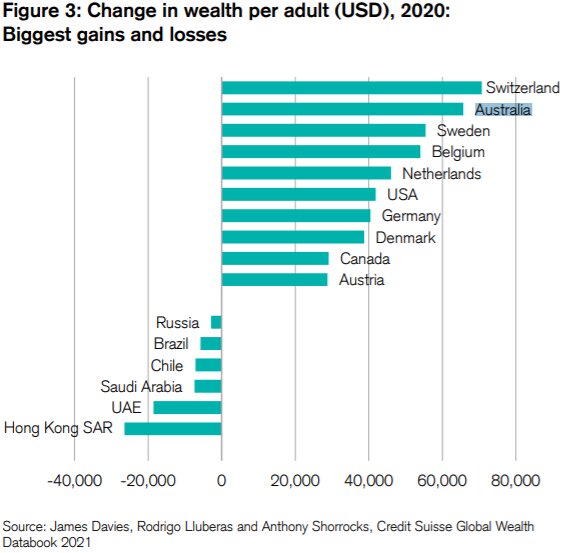 So, on the global stage, Australia’s wealth is pretty impressive. For a relatively ‘small’ population in a relatively ‘new’ country, we’re well and truly up there with the best of the best in terms of our wealth.

Why should we care about our wealth?

At the end of the day, why does it all matter? Is it all just for bragging rights, or does being a wealthy country have real benefits for those of us who call Australia home?

Well, a country’s wealth correlates ‘strongly’ with prospects and opportunities according to Credit Suisse. Basically, it allows people to strive for goals bigger than the basics. Not needing to worry about the bottom of Maslow’s pyramid of needs - like access to food and shelter - means we can reach for the stars and try to achieve the need of our own self-fulfilment.

Whether your goal is to become a doctor, a teacher, an artist, or an entrepreneur - our wealth can be used directly or as collateral for loans to make these dreams a reality according to Credit Suisse. For example, if you can’t afford to pay for your university degree outright (and let’s face it, who can?), you can take out a HECS-HELP loan to cover the costs in the interim. Alternatively, if you need some cash to get your startup off the ground, you have the option to take out a business loan. In countries with lower wealth levels, business opportunities can be fewer and there might be less access to investment capital that a company needs to grow.

According to Credit Suisse, a good measure of whether a country offers favourable entrepreneurship conditions is how many millionaires are in its population. With Australia up there with nearly two million millionaires, this means that generally speaking, the conditions are pretty good.

But being wealthy isn’t just good for the economy and business opportunities - wealth is important for individuals. Wealth can act as a buffer, ‘cushioning the blow’ of out-of-the-blue financial burdens like sudden illness, job loss, or even a natural disaster. Without wealth behind them, people can be “literally at the mercy of the elements”.

Image by Joshua Hoehne on Unsplash

43% of millennials would rather invest than spend: CBA

Overall health has a 'strong relationship' with financial wellness: ANZ