Photo by Alexander Andrews on Unsplash

The rate of lending to property buyers grew by only 0.17% in August, well below the rate of growth seen in July.

The latest Reserve Bank Financial Aggregates data, which shows the change in lending and credit provided by financial institutions, show August’s figure is down from 0.28% in July.

It is, however, above the 0.15% growth recorded in June, which was the lowest-ever recorded.

This is actually the smallest annual growth ever recorded since records began in 1977.

In fact, this annual growth figure has been falling since June 2017, which was the last month to not set a new record low for annual housing credit growth.

Owner-occupied lending grew by 4.7% over the year and 0.34% over the month – this monthly figure is only just below the monthly average of 0.39% over the past year.

Investment lending actually declined over August, with a minor monthly reduction of -0.10%, marking the sixth consecutive month of negative growth.

Over the last 12 months, investor lending growth has been a meagre 0.06%, which is comfortably an all-time low.

“That means that principal is being repaid more quickly – which acts to slow credit growth,” Mr Hanlan said.

According to Mr Hanlan, a lift in new lending will see housing credit growth strength over the coming months.

“More recently, new lending for housing has turned the corner – with a rebound in June and a jump in July,” he said.

“Sentiment has bounced following the May 18 Federal election, with the return of the Coalition government. The RBA lowered rates in June and again in July, with additional cuts likely, and APRA has eased mortgage serviceability assessments.”

The Reserve Bank is expected to cut the cash rate by a further 25 basis points tomorrow.

A factor that’s often been linked with falls in household lending is the tightening of banks’ lending requirements following the damning insights gleaned from the Royal Commission.

As a result, it appears that would-be borrowers are turning to increasingly desperate measures to secure approval for a home loan, such as lying on their applications.

According to UBS, the number of mortgagors who acknowledged their application was not “completely factual and accurate” rose to a record 37% in 2019, up from 32% in 2018. 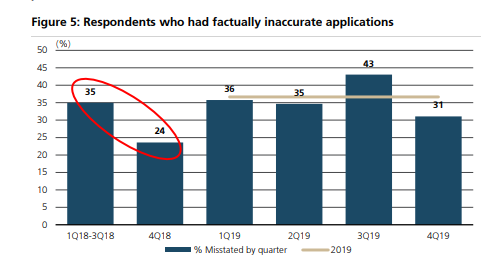 UBS Analyst Jonathan Mott said more borrowers may be prepared to embellish their applications in order to get approved.

“Since the Royal Commission was announced, the banks have significantly increased their level of verification, more questions are asked and more documentation is being requested,” Mr Mott said.

“We had expected this to lead to an increase in the accuracy of mortgage applications.

“Unfortunately, this was not the case.”

Not only has the number of inaccurate applications increased, but the extent of them has also.

UBS’ report shows a “statistically significant” increase in the number of customers overstating their income by 15-24% (29% of respondents) and by as much as 35% (11% of respondents). 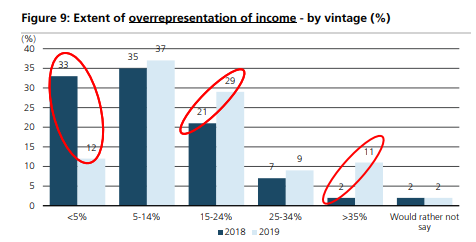 For mortgagors who admitted underrepresenting their other financial commitments, 16% understated their other debts by as much as 25%. 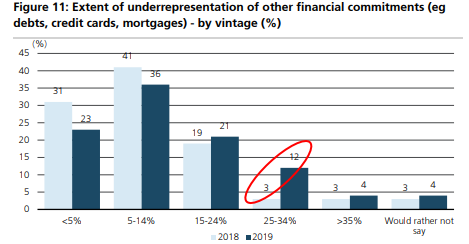 According to UBS’ report, factually inaccurate applications are much more prevalent through mortgage broker channels.

There was a slight deterioration in factual accuracy across both channels with 40% of mortgage misstatements made through the broker network compared to 27% through the banks’ proprietary networks.

Shockingly, 28% of such applicants who went through a broker said their broker encouraged them to misrepresent elements of their application (7% of all respondents).

With so many borrowers gaming the system, Mr Mott recommends a shift away from traditional methods of scrutinising applications to more recent methods, such as utilising open banking.

“While asking increasingly detailed questions appears prudent, it does not appear to be effective as many factually inaccurate mortgages are still working their way through the process,” he said.

“We believe the regulators and lenders may need to consider: (1) Moving away from asking questions to analysing data as Comprehensive Credit Reporting and Open Banking are rolled out; (2) Adopting more rigorous Debt-to-Income limits in the interim.”