Photo by Tyler Nix on Unsplash

Home buying intentions were one of the weakest areas of spending intentions in April, however that stabilised in May, driven by an increase in mortgage applications.

In particular, owner occupiers are continuing to lock-in fixed rate mortgages, with many mortgage products now firmly in the low-2.00% range, as can be seen in the table below.

Judging from the chart (at foot of article), owner-occupiers now make up nearly half of all fixed rate mortgage loan books.

Traditionally, fixed-rate home loans were heavily favoured by investors, but less so by owner-occupiers.

CBA chief economist Stephen Halmarick pointed to a potential 10% fall in home prices for the remainder of 2020, but said there are signs the falls may not be as bad.

Previously, CBA economists predicted a 'worst case scenario' of home prices falling by up to 32%.

Spending in retail and eating out increases as restrictions ease

Many sectors in CommBank's household spending intentions report were either flat or in decline, with retail spending the only sector experiencing upwards trajectory.

This was buoyed by food, general retail and household furnishings, according to Mr Halmarick.

“It is also worth noting that a larger share of retail sales is now likely flowing through credit/debit card spending, rather than by cash," he said.

"Cash withdrawals by CBA personal account holders from ATMs, EFTPOS and branches is down 29% [for the] year in May."

"Growth in online spend looks to have peaked, while the easing in restrictions has seen in-store card spend lift," he said.

"Growth in CBA in-store household card spend continues to track higher than in-store merchant spend, reflecting the impact that a lack of foreign tourists is having on overall expenditure."

Food goods expenditure has also plateaued, after peaking in March and April, largely due to hoarding, while food services has picked up again due to eating-out restrictions having been eased. 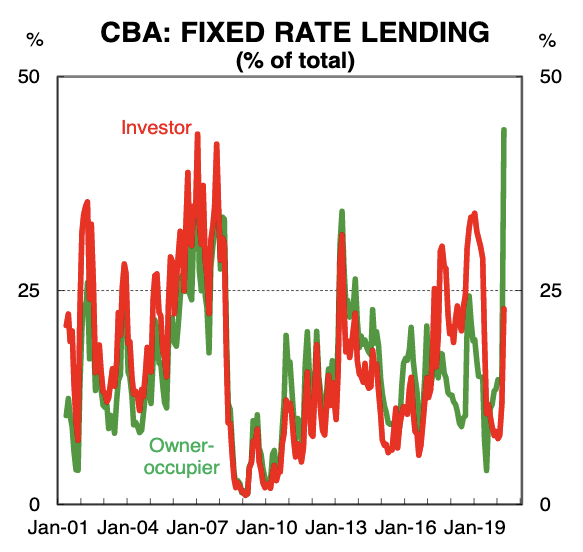