Regions across Australia have seen sharp rental value growth, with one region experiencing a 23.7% increase in rent prices.

The past year has seen sharp rental increases across Australia with an overall 6.6% annual increase in rental value, according to CoreLogic.

This is compared to the decade average of 1.8% growth each year.

Regions have led the charge, with South East Tasmania experiencing a 23.7% growth in rent prices over the past year.

"Applying this growth figure to the median rent suggests an increase of $83 per week in rent over the year," said Eliza Owen, CoreLogic Australia's head of research.

"Net internal migration data suggests for the year to June 2020, the South East region saw a positive migration trend, of an additional 660 people moving to the region from other parts of Australia.

"Historic overseas migration to the region has also been positive, and may have contributed to upward pressure on rent values.

Greater Darwin, too, experienced sharp rental price growth, up 21.8% on the year. 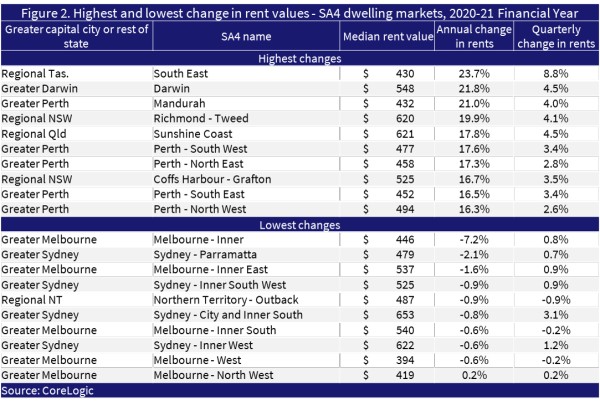 Which regions saw the biggest increase?

According to CoreLogic data, there were ten regions that experienced 'extremely' high growth. The region that experienced the highest growth was Regional Tasmania, specifically the South East region, with a rental value increase of 23.7%.

Divergence between city and country

Despite the overall national rental value increase, there were a few select regions that experienced a rental value decline over the last 12 months.

Most of these regions, apart from one, are located within Greater Sydney and Greater Melbourne.

Number of rental listings on the decline

In addition to the rental value growth, the amount of rental listings in many areas are on the decline.

Mandurah in particular saw a sharp decline, with listings down 40%.

According to CoreLogic data, the Perth rental market's strong uplift may be due to a "longer term retreat of investor activity".

Additionally, the recent rental increases could be exacerbated by "slowly dwindling rental supply", according to CoreLogic.

Photo by Nico Smit on Unsplash