That's the fastest rate of growth in 32 years.

The house price boom remained broadly based, with values rising at least 1.4% across each of the capital cities and 'rest-of-state' regions over the month.

CoreLogic Research Director Tim Lawless said Sydney led the way in March, with values spiking 3.7% to be 6.7% higher compared to the first quarter of 2021.

“The last time Sydney housing values recorded a quarterly trend this strong was in June/July 2015. Following this brief surge, the pace of growth rapidly slowed as limits on investor lending kicked in to slow the market," Mr Lawless said.

CoreLogic's combined capital cities index recorded a 2.8% lift in March, compared with the 2.5% gain in the combined regional index.

“Housing values in regional areas are 11.4% higher over the past year, demonstrating the earlier stronger growth trend; capital city values are now 4.8% higher on an annual basis with the acceleration in growth evident in March.”

Sydney and Melbourne have now staged a full recovery from their 2020 downturns and have now started to outpace smaller capitals which had previously outperformed them.

Victoria was the only state where regional areas outperformed the capital, with regional Victorian values up 2.6%, compared to a 2.6% rise in Melbourne. 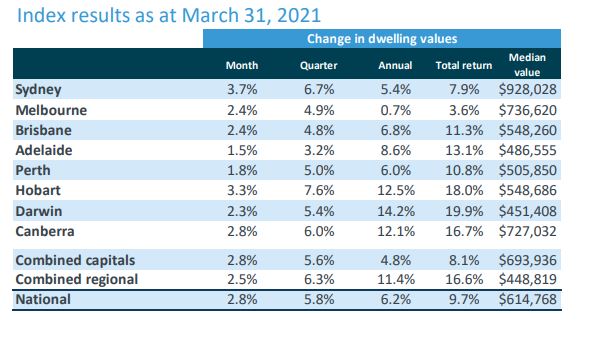 Skyrocketing property prices are being supported by a disconnect between demand and supply, with total advertised listings remaining extremely low in March.

National total listing numbers showed advertised stock levels were 25.5% below the five year average over the four weeks to March 28.

However, the past four weeks saw new listings nationally trending 8.1% higher than a year ago and 3% above the five year average.

“The ratio of sales to new listings is tracking at around 1.1, implying for every new listing added to the market, 1.1 homes are sold. Such a rapid rate of absorption is keeping overall inventory levels low and adding to a sense of FOMO amongst buyers," he said.

A frenzied auction market is also supporting strong conditions, with the last week of March the busiest week for auctions in three years and house auction prices reaching record-breaking levels.

Estimated sales activity remained elevated over March, with CoreLogic estimating the number of home sales over the month was 21.9% higher than a year ago.

CoreLogic found there were significant differences between regions and housing types in the rental market.

Geographically, Darwin and Perth had the tightest rental markets, with house and unit rents both recording double-digit annual growth.

But rents are rising at record-breaking pace in Perth and Darwin, with the quarterly trend up 5.9% and 7.7% respectively.

“Rental prices in Perth and Darwin started surging higher in September last year. The monthly growth in rents across Perth quickly accelerated from an already high 1.1% in September 2020, to 2.0% by March 2021," Mr Lawless said.

Elsewhere, the unit markets in Melbourne and Sydney continue to be a drag with no overseas migration and border closures.

“Sydney unit rents have posted a subtle rise over the past three months, while unit rents in Melbourne have held firm over the same period," he said.

"The improvement comes after a long running decline, however a material improvement in rental conditions is likely to be dependent on foreign students and visitors returning to shore up inner city unit rental demand.“

Photo by Aldrino on Unsplash