Australia’s parking costs among the highest in the world Photo by Omer Rana on Unsplash

Australia is the most expensive country in the world for daily parking in absolute terms, a global study has found.

The Parkopedia 2019 Global Parking Index report found the average daily price of off-street parking (aka carparks) in Australia is $US29.71 – a 6.6% increase from the previous study in 2017.

We’re well ahead of Switzerland, who moved from 10th to 2nd due to the strength of the Swiss Franc, while the US and UK, which have two of the most expensive cities in the world (New York and London), aren’t even in the top 10 due to the relatively soft pricing of parking in their other cities.

The US and the UK sit in 11th and 21st respectively.

In terms of individual cities, Sydney, Melbourne and Brisbane all feature in the top 10 for daily off-street parking.

In the top 10, six are based in the USA and Australia.

New York occupies second place at $44.98 US dollars per day while London holds top spot at $US45.95.

Australia also has the most expensive short-term parking

Australia has also retained its title from 2017 as the most expensive country for short-term, two-hour off-street parking.

Interestingly, New Zealand sits at number three at $US8.16 an hour, while the US is a distant second at $US9.68.

After adjusting for purchasing power parity, Sydney, Melbourne and Brisbane again feature in the top 10 for two-hour parking, wth Sydney taking out top spot at $US36.66.

Only two non-Australian or US cities – London and Hong Kong – feature in the 10 most expensive cities list.

We fare a little better for on-street parking

This is the same for the USA and New Zealand, and according to the report this reflects “the reluctance of city governments to raise the highly visible price of on-street parking”.

Australia features in eighth spot for two-hour on-street parking, with an average cost of $US4.27.

The Netherlands is the most expensive at $6US.94, while the USA sits outside the top 10 in 14th.

Sydney is the only Australian city to feature in the top 10 most expensive cities for on-street parking ($US7.01). 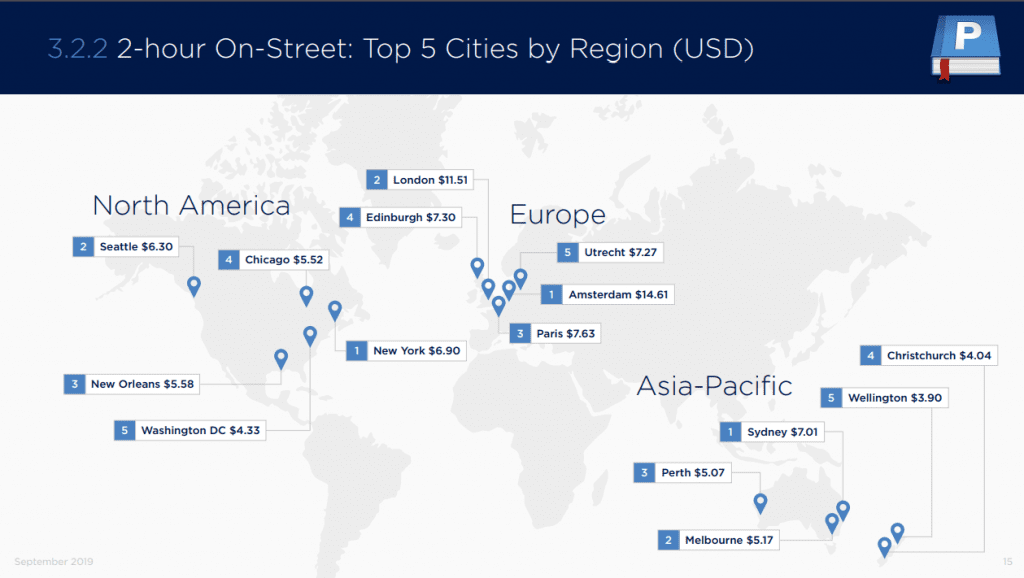 It calculated prices during the following times:

To determine the relative cost of parking in each location, local prices were converted into $USD using a 3-month average (April-July 2019) currency exchange rate.