According to Delia Rickard, Deputy Chair of the Australian Competition and Consumer Commission (ACCC), this total loss was $149 million higher than in 2017.

“These record losses are likely just the tip of the iceberg,” Ms Rickard said.

“We know that not everyone who suffers a loss to a scammer reports it to a government agency.”

Investment scams surged 34% from 2017 to hurt Aussie finances the most, causing losses of $86 million.

Ms Rickard said these losses were “extraordinary” and showed that scammers are causing financial and emotional harm to many Australians.

“Scammers are adapting old scams to new technology, seeking payment through unusual methods and automating scam calls to increase their reach to potential victims,” she said.

The average loss reported to Scamwatch was $5,997.

Scamwatch’s data show that men were hit with by $56.9 million in losses to scams and women slightly less at $48.8 million.

Men were reported to be more affected by investment scams while women reported bigger losses to dating and romance scams. 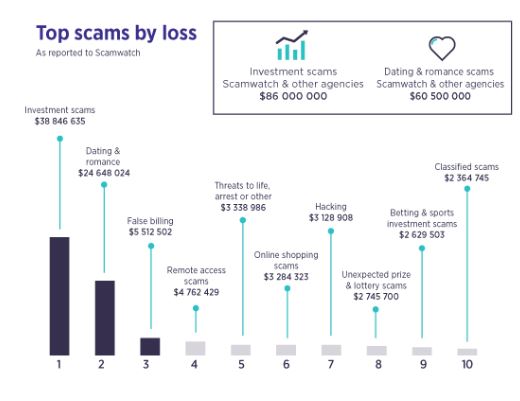 Victims of these scammers were told they owed money to the tax office and were threatened with arrest unless these unpaid taxes were paid.

#EXCLUSIVE: You may have heard of the recent ATO scam... Foreigners cold call and say, you have a huge debt that needs to be paid immediately. Sadly, many Aussies have already fallen victim to their lies.#9ACA | WATCH THE FULL STORY: https://t.co/HBhAjzUiPe pic.twitter.com/L1OeutEDDW