Do students need a credit card? Students 18 and over in Australia should really consider whether or not they need a credit card.

The student life is really the first taste of true freedom most people get – no more teachers peering over your shoulder or homework being checked every day. It’s also often the first ‘living out of home’ experience for many. Some even refer to their student days as the best time of their lives, as it hits that sweet spot between parental dependence and ‘slaving away’ for the next 40 years.

It’s a time you should be enjoying yourself, but it’s also a time when you need to learn to be responsible with your money. Managing money as a student can be tough. When you factor in study, time allocated to work is limited, and it is well acknowledged that living on youth allowance is below the poverty line.

A shocking 2017 study by Universities Australia found that one in seven university students regularly go without food because they can’t afford it.

To manage their expenses, some turn to credit cards. While you may not be in quite as bad a situation as this, you should still know the pros and cons of getting a credit card as a student.

What is a student credit card?

Credit cards are a line of credit that allow users to borrow money for purchases, to be repaid at a later date. To facilitate this borrowing you’re given a card.

Compared to rewards and premium cards, which offer extensive rewards programs and features for big spenders, credit cards marketed for students will typically have lower fees, since they’re targeting a more ‘frugal’ market. Conversely, their interest rates can be among the highest on the market, since low-earning students are perceived as ‘riskier’ borrowers.

Is it easy to get a student credit card?

Given that they’re designed for students (who may not be working regularly), student credit cards can have more lenient approval standards than other credit cards, with lower minimum annual income requirements (e.g. $15,000 rather than the typical minimum of $50,000). They may even allow Centrelink payments to be included as income. These cards may also have a lower credit limit, which reduces the amount you can spend before being cut off.

Depending on the card, to be eligible you may have to be a full-time student or within a certain age bracket (e.g. 18 to 25).

These days, there actually aren’t many credit cards in Australia specifically designed for students – several have been discontinued in recent years. By searching for ‘student credit cards’ online it won’t be too hard to find the few that remain.

Just because these few cards targeted at students doesn’t mean they’re the perfect option for students. There are other things you need to consider like the interest rate, annual fee and more – we’ll cover this in greater detail below.

Should college students get a credit card?

Credit cards are for convenience – they shouldn’t be a necessity. No matter whether you have a credit card or not, you should never spend what you can’t afford. With common sense budgeting, you can always get by on your trusty debit card, as this only allows you to spend money you have.

So no, students do not need a credit card. But there are a few reasons why having a credit card could be convenient for a student.

For instance, in student life, casual work can be irregular and youth allowance claims can take time to be processed, so at times it can be hard to come up with the cash for important study purchases such as textbooks and laptops.

Have you been waiting to get paid #YouthAllowance or #Centrelink? Some students have been waiting of 3+ months.

Outside of tuition itself, textbooks are the biggest expense for uni students. A Universities Australia study in 2013 found that the average student is shelling out $600 a year for textbooks. That’s a lot of money spent on books which many students barely read yet still manage to pass their subjects.

Also, a decent laptop for taking notes (or making memes) in a lecture can also set you back at least a few hundred dollars, which isn’t something every student has lying around.

If you’re a student who knows you won’t have the cash to pay for these big-ticket education items until later in the month, a credit card could be used to purchase them now so you don’t have to fall behind in your studies.

On top of study costs, students have to find room in their limited budgets to pay for general lifestyle expenses like groceries, transport, household appliances and furniture. Paying with a credit card can save you from having to go without such necessities for weeks on end.

But students should beware of their credit debt spiralling out of control. Only spend what you can afford to pay off before the end of the credit card’s statement period, so you avoid being charged interest. 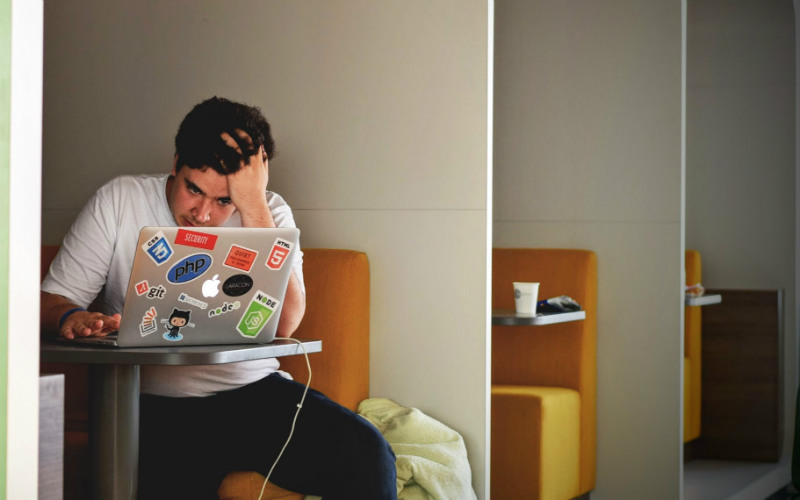 The traps of credit cards for students

A recent study by UniBank found that 88% of Aussie students have their purchasing decisions influenced by social media – 28% of them don’t actually have the money in their budget before making a purchase. A further 19% of them admitted to using a credit card as their main source of spending.

It seems that impulse shopping is a very real thing for students, and having a credit card on you makes it so much easier to spend with it. And if you don’t pay off that spend? You’re charged interest.

It might interest you (pun intended) to know that the average credit card holder’s debt is nearly $2,000 per person, based on RBA data. How long would it take you to pay off $2,000? Now take interest into account.

Credit cards have a minimum monthly repayment between 2-3% – you can’t pay any less than this. So if you had $2,000 worth of debt and you only repaid the minimum, it would take you seven years to repay it without interest. With interest, it’s an entirely new story.

So you can see a clear relationship between making higher repayments and paying less interest. Prolonging the length of time results in more interest being paid, and any debts you add to this balance will further increase your interest repayments.

Paying the balance off in full every month can save you from these interest costs, so don’t build up a balance you can’t pay off.

To avoid this problem, you could ask for a lower credit limit.

We touched before on the fact that the ideal first time credit cards for students should have a low annual fee. This is the fee charged by the bank for keeping the account open, and it’s very possible to get a card that doesn’t have one.

There are credit cards out there that have annual fees higher than $700+ dollars (almost $60 a month). Unless you’re quite well off already, you shouldn’t be looking at one of these cards as a student – they’re targeted more towards big spenders who like to take advantage of premium features like access to airport lounges and complimentary travel insurance.

A low (or no) annual fee credit card can help keep costs down as a student. Credit cards marketed specifically to students can have annual fees of around $30.

We’ve also written a comprehensive guide on other credit card fees and what you can expect to pay for them. Did you know you can also be charged a late payment fee of up to $35? You do now.

Not choosing the right card

A lot of people make the mistake of just picking the first card they see and sticking with it without properly comparing their options. Thanks to our friend the internet, it’s pretty easy to compare credit cards on things like fees, interest rates, features or credit limits.

Let’s give a case study with a fictional student taking out their first credit card:

Arthur is starting his second year of university and has just moved out of home into a flat with some friends. All of a sudden he doesn’t have immediate access to the Bank of Mum and Dad, and given that he can only work two days a week due to study, he decides to get a credit card to help make sudden payments.

He looks up ‘student credit card’ and sees these two options:

He decides to go with the first option due to the $0 annual fee. He doesn’t really put much thought into the card’s interest rate, as he doesn’t plan on spending that much with it anyway.

However, after a couple of months, Arthur ends up making a few too many needless purchases. He also had to make some necessary ones, like a new laptop for study and Red Dead Redemption 2.

His credit card debt has now blown out to $1,300, which he can’t afford to pay off before the end of the statement period:

This is a worst-case scenario, but you can see just how much of a difference a lower interest rate can make.

When it comes to credit cards for students, try to apply Jeff Goldblum’s logic from Jurassic Park:

(You) were so preoccupied with whether or not (you) could, that (you) didn’t stop to think if (you) should

There’s a very strange culture in Australia that almost seems to encourage reckless credit card spending to ‘treat yo self’, but the reality is this is very dangerous to do with a credit card. Your ability to use one responsibly depends on your income and budgeting skills, and let’s face it, as a student you’re probably not going to be flushed with cash.

We won’t say you shouldn’t get a credit card – they can be useful when used correctly. But if you feel you need one, you should consider a card with low fees and low interest rates that you can use for emergencies, and make all your other purchases with your own hard-earned money. Use this time as a student to practise money discipline and build some good savings habits. There’ll be plenty of time to splash the cash later.