More than 1.5 million Australians are under mortgage stress and a rise in mortgage arrears and defaults are likely amid the nation's deep recession.

DFA defines mortgage stress as when household cashflows are negative, rather than the more widely used measure of a household paying more than 30% of their income on mortgage or rent.

"Stress is assessed in cash-flow terms, and when money in is not sufficient to cover the costs of the mortgage and other regular outgoings, the household is flagged as stressed," said DFA principal Martin North.

The figures show that a massive 102,273 households are at risk of defaulting on their mortgages with Tasmania, Victoria and Western Australia leading the way.

In Western Australia, 43.4% of households are behind or struggling to make their mortgage repayments.

"The August 2020 data from our surveys continues to tell a sorry tale of more households feeling the pinch, whether they are mortgaged, renting or investing," Mr North said.

"Within the numbers there was a slid in Victoria in particular reflecting the latest lock down and the rising pressure on business there."

The data found that young growing families and urban households, which includes many first home buyers, were under the most mortgage stress. 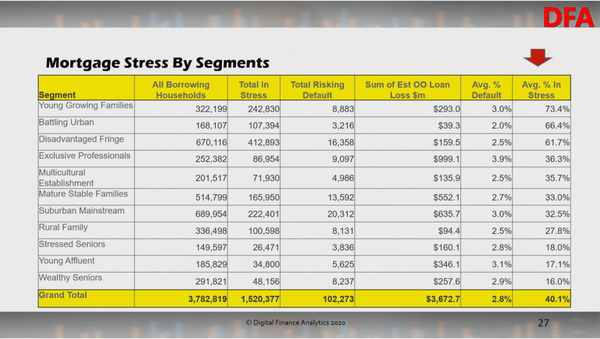 Rental stress also remains a significant issue, with over 41% of renters (1.7 million households) struggling to afford their rent.

Again, young growing families and urban households were the most impacted, with 74% of young families under rental stress.

The data also found that investors are struggling, with 25% (826,000 households) under water or trying to offload their investment properties as rentals slide and property values decline.

"Clearly the fiscal cliff, which is now legislated, will push more over the edge. Expect higher default levels over the next few month, more forced sales and less household consumption," Mr North said.

A new report from analyst firm S&P Global has also predicted a rise in mortgage arrears and defaults in the final months of 2020, as the deadline for mortgage deferrals fast approaches. The Australian Banking Association (ABA) has announced it will extend the mortgage deferral period by another four months for customers experiencing ongoing financial difficulty.

S&P Global's mortgage report said the number of mortgage arrears and defaults will largely depend on when mortgage support measures end.

“We expect arrears to begin surfacing in the second half of 2020, and losses to emerge in 2021,” the report said.

“Mortgage arrears performance is meanwhile likely to vary by state and territory, reflecting their different paths to economic recovery.”

The report identified Sydney’s inner, southern and other south west regions, Melbourne’s east and the Mornington Peninsula and Queensland’s Gold and Sunshine Coasts as "hardship hot spots" as those areas have been more exposed to lockdowns and drops in tourism.