House prices in Australia declined 0.4% in August - the fourth straight month of falls - with Melbourne the 'main drag'.

While CoreLogic's home value index fell for the fourth straight month, the rate of decline slowed, and five of the eight capital cities recorded steady or rising values through August.

Over the past 12 months, however, prices are still up in all capital cities, except Perth where values have declined 2.0%, while Darwin was flat.

CoreLogic's head of research Tim Lawless said Melbourne was the "main drag" on the headline results.

"Through the COVID period to date, Melbourne home values have fallen by 4.6%," he said.

“The performance of housing markets are intrinsically linked with the extent of social distancing policies and border closures which also have a direct effect on labour market conditions and sentiment.

"It’s not surprising to see Melbourne as the weakest housing market considering the extent of the virus outbreak, and subsequent restrictions, which have weakened the economic performance of Victoria." 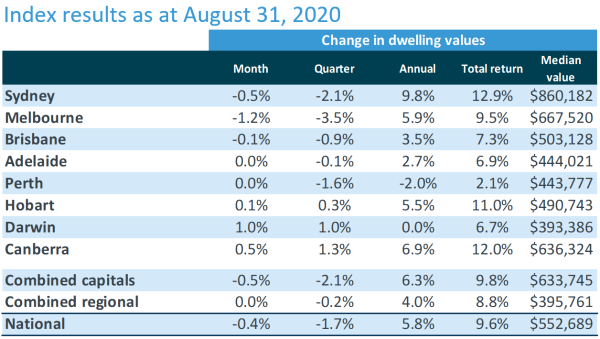 While home values in the capital cities during the COVID-19 period have been mixed, property analyst group Propertyology said the pandemic will change the way we think about how we live.

“People will disburse in a different pattern. A germ does not diminish Australia’s total demand for shelter, but it will significantly influence where people choose to take shelter,” he said.

“More manageable mortgages, low density locations that are less susceptible to future lockdowns, a regional relocation, and working from home will be driving forces.”

Mr Pressley also said the pandemic is the final 'nail in the coffin' for inner-city apartments.

“This asset class was increasingly problematic pre-Covid. And now the future is uncertain for workers in hotels, restaurants and hospitality that normally service international visitors," he said.

"Ditto, the airline industry and international students. Many of this demographic are part of the yolk of the egg, renting an inner-city apartment.”

Mr Pressley also said there could be a "capital city exodus" of more than 100,000 people in the next three years.

"In locations all over Australia, our buyer’s agents have already observed first-hand proof of the regional shift," he said.

Notably, in the past 12 months, regional Tasmania's values are up 9.8%, level with Sydney's performance, with most other regions also up on the year.

"Unlike their capital city counterparts, which usually receive 85% of net overseas migration, most regional markets have avoided the drop in demand caused by the pause in migration," he said.

"Regional markets may also be appealing for their relatively low density and lower price points. The normalisation of remote work through the pandemic could make proximity to major cities less of a factor in home purchasing decisions.”

“After settling into a new groove, we [Propertyology] then realised each of us had ‘manufactured’ an extra 12-hours in our week through not having to commute to and from the office each day," he said.

"That does wonders for productivity and work-life-balance. Consequently, we have made this a permanent thing.”