"The persistently missing middle": that's the problem CoreLogic has found in the latest dwelling approval statistics, released monthly by the Australian Bureau of Statistics (ABS).

The new ABS data revealed that medium density housing made up only 14.9% of dwelling approvals in November.

"Medium density housing options can be important for young families who seek a more affordable housing option close to city centres, but require more space than in a unit, or older Australians wishing to downsize in their current area of residence to reduce housing costs in retirement," Ms Owen said.

'Medium-density' is categorised as townhouses, duplexes, and unit blocks three storeys or less.

The ABS's release on November's statistics found a quarter of all approvals were in just 10 local government area (LGA) regions, out of a total of 478 captured.

These LGAs include the ACT, Brisbane, Sunshine Coast, Gold Coast, parts of Western Sydney and fringe-Melbourne metro areas - they made up about 43,000 of all dwelling approvals in November.

In the top ten LGAs, just 14.1% of dwellings approved in November were medium density - detached housing made up 60.7%, while high density units made up 25.2%.

"If development continues to focus on the two extremes of density, metropolitan areas may see an erosion of diverse age and family demographics," she said. 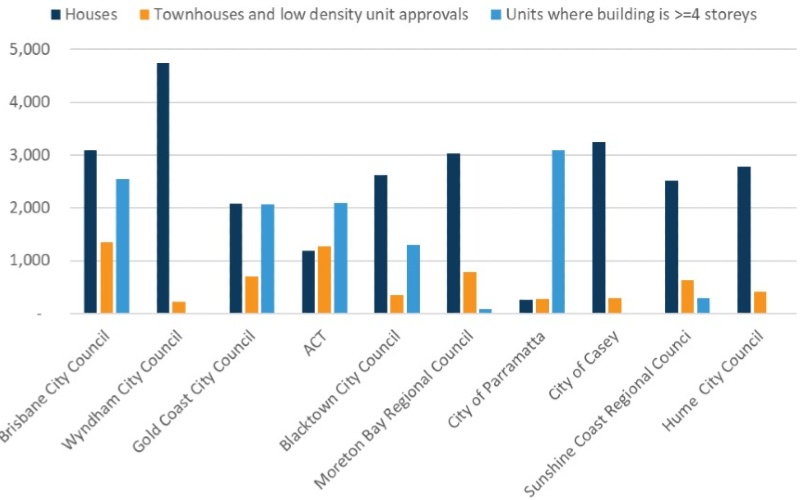 The spread of dwelling approvals across the top ten LGAs in Australia. Source: CoreLogic

December auctions: the winners and losers

Across capital cities (minus Darwin), the clearance rate was 70.3%, comprising of 26,923 auctions.

This is a sizeable jump on the previous quarter, where the clearance rate was 69.9% and auctions totalling 16,730.

“As prices in Sydney and Melbourne rose 6.2% and 6.1%  respectively in the December quarter, a corresponding increase in auction market activity is expected," Ms Owen said.

"Vendors have been responsive to higher prices, with auction volumes up by 4.0% year on year."

Four suburbs throughout all of the capital cities experience a 100% clearance rate: Balaclava in Melbourne, Camperdown, Kingsford and Panania in Sydney.

Brisbane and Perth were the worst-performing capital cities in terms of clearance rate (as seen below).

The clearance rates and volumes across the cities were:

In non capital cities, Geelong was the leader with the highest clearance rate at 62.8%, while Gold Coast was the busiest with 634 homes taken to auction.