Photo by Henry & Co. on Unsplash

NAB’s monthly business survey – considered by the Reserve Bank to be a leading indicator of trends in the labour market – shows employment figures have fallen sharply in April.

Trading conditions, profitability and employment all weakened from the levels reported in March.

The employment index was perhaps the key development in this month’s data: it fell to a below-average level for the first time since late 2016. 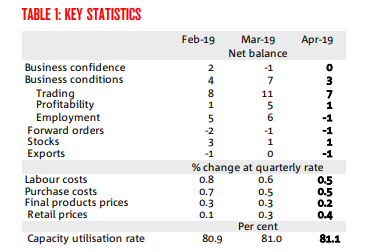 “While trading and profitability have previously dipped below average, this is the first time the employment index has shown signs of weakness,” he said.

“While employment has previously held up better – similar to official data – the impact of slowing activity and a weak outlook may now be flowing through to the labour market.” 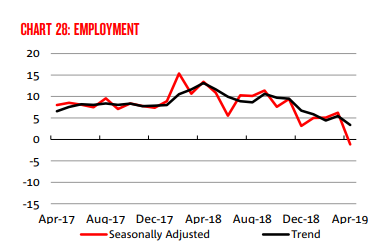 According to NAB, the employment index has been one of the survey’s few positive indicators in past releases.

This decline over the past month was mainly concentrated in Queensland, South Australia and Western Australia, but it fell in every state in some capacity.

The likes of Victoria and Tasmania still have an employment index above the average, while New South Wales sits around the average. 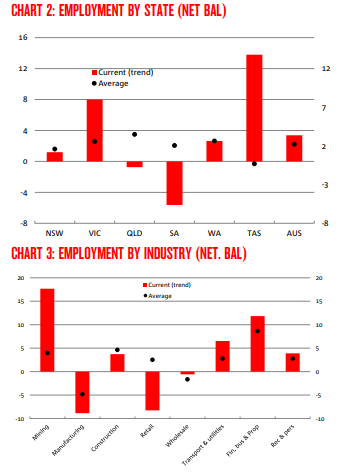 “Across industries, we continue to see the best conditions in mining and the services sector – recreation & personal, and finance, business & property services,” Mr Orster said.

“While retail saw some improvement in trend terms, the goods distribution industries, including wholesale and retail remain weakest.”

It looks unlikely these figures will improve in the coming months, with the data shows hiring intentions over the next three and 12 months have eased, although they still remain relatively elevated.

“The forward-looking indicators of the survey continue to suggest that the weakening in conditions over the second part of 2018 is unlikely to be reversed any time soon,” Mr Oster said.

“Conditions are still positive but below average, suggesting a loss in momentum but that for now the private sector continues to grow moderately.”

The Reserve Bank said in its April monetary policy meeting it would strongly consider cutting the cash rate in the absence of rising inflation and increased unemployment.

That first part has already come true – inflation figures for the March quarter recorded a 0.0% movement, dragging the annual CPI inflation rate down to 1.3%, well below the RBA target of 2-3%.

Unemployment, on the other hand, has previously remained low, but if the trend seen in April continues it looks more likely the RBA will cut rates in the coming months.

“We will continue to watch the employment index as well as the other forward-looking variables over coming months for further slowing,” Mr Oster said.

“In particular, the readings of labour market-related variables will remain important as, for now, the interest rate outlook appears to hinge on continuing strength in the labour market.”

Official data on wage growth and unemployment will be released by the Australian Bureau of Statistics later this week.