How RBA rate cuts may have affected Australia’s housing market Australia’s rapid growth in house prices and construction over the past few years is largely a result of low interest rates, according to new research published by Australia’s central bank.

Reserve Bank of Australia (RBA) economists Trent Saunders and Peter Tulip modeled the relationships between construction, vacancies, rents and prices in a research discussion paper on the Australian housing market.

“We find that  rates (partly reflecting lower world long-term rates) explain much of the rapid growth in housing prices and construction over the past few years,” the authors wrote.

The report’s authors modeled a scenario in which the RBA had maintained the cash rate at 4.75% since 2011 and estimated how this would have influenced key housing market measures.

According to the figure below from the report, the cuts to the cash rate since 2011 (bringing it down to 1.5%) have had a significant impact on the dwelling price-to-income ratio and the level of dwelling investment in Australia. 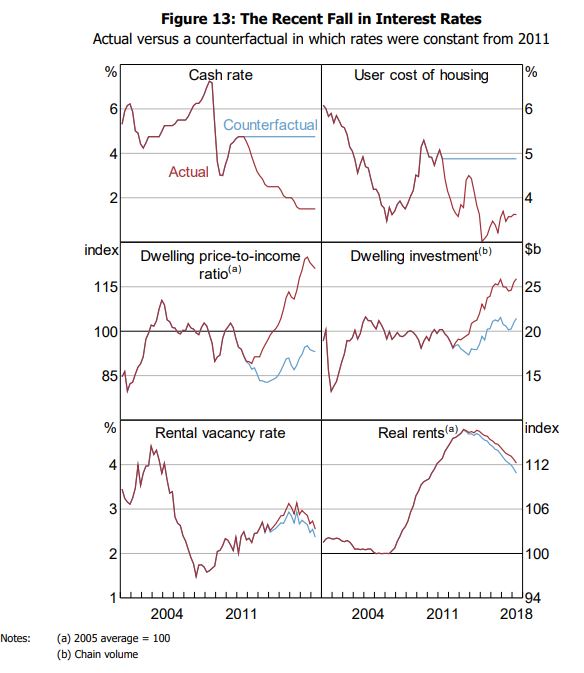 Source: A Model of the Australian Housing Market (RBA)

“The model estimates that the reduction in real interest rates accounts for most of the subsequent boom in dwelling prices (middle left panel) and a large part of the boom in dwelling investment (middle right),” the report said.

“The increase in housing supply boosts the vacancy rate and reduces rents.

“However, these effects are offset by the effect of higher income, with neither the vacancy rate (bottom left) nor rents (bottom right) being much changed on net.”

The report’s authors also estimated how much housing prices would rise if the cash rate was dropped by a single percentage point (100 basis points).

They calculated that a 100 basis point rate cut would hypothetically boost house prices by 17% to 28%, depending on user cost.

User cost represents the annual cost of owning a house – a combination of interest payments, repairs and other costs minus expected capital appreciation.

“At a user cost of 6 we estimate that a sustained percentage point drop in interest rates would, in the long run, boost housing prices by 17%, holding rents and other components of the user cost equal,” the report said.

“With a current user cost of 3.5% (well below that observed in the studies above), a percentage point drop in the expected real mortgage rate would boost housing prices by 28% in the long run.”

The paper’s authors said while these large house price responses to interest rate cuts may seem surprising, they are in line with other research and are consistent with theory and available data.