Melbourne and Canberra have joined Sydney in the $1 million club, with median house prices hitting seven figures for the first time.

Median house prices have risen in every capital city, from 12.3% to 29.2%, which economists attribute to people being able to divert more money to housing throughout the pandemic.

The highest median house price growth was seen in Canberra, which experienced a 29.2% increase over the past year.

Following closely behind Canberra was Hobart, with the median house price growing by 28.4%.

In addition to house prices, median unit prices experienced some growth across the country.

However, prices fell in Brisbane and Perth, by 0.4% and 1.7% respectively, and remained the same in Adelaide.

There is currently a 30.5% gap between median house prices and median unit prices, which is the highest gap ever recorded, according to CoreLogic research. 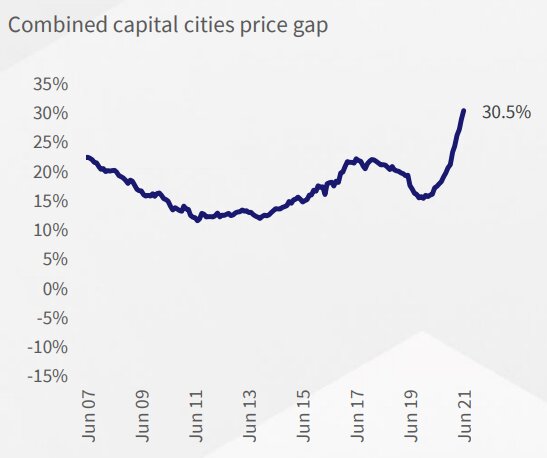 June 2021 marked the greatest divide between unit and house prices in 15 years in Sydney, Melbourne, Brisbane, Adelaide, and Canberra.

The biggest price gap was seen in Canberra, with a 74.8% price gap between houses and units.

The median unit and house price gap has recently come down from a record high in Perth, from 39.1% in May to 38.9% in June, according to CoreLogic.

The price gap has also been trending down in Hobart and Darwin.

Image by Julian Varon on Unsplash