Australia well equipped to deal with economic fallout from coronavirus Photo by Shi Min Teh on Unsplash

Australia's central bank has painted a cautious but positive outlook for the country's financial system as it grapples with COVID-19.

The Reserve Bank of Australia (RBA) released its bi-annual 'Financial Stability Review' on Thursday, stating while the pandemic has crippled global economies, Australia is well placed to manage a looming recession.

However, Australia's high level of household debt continues to be a longstanding risk to the financial system.

"Surveys indicate that about one in five households only have enough liquid assets to get from one pay period to the next," the RBA said.

"These liquidity constrained households are typically young, twice as likely to be renting and twice as vulnerable to unemployment compared with other households.

"Amongst households with mortgage debt, just under one-third of mortgages have less than one month of prepayments, and about half of these appear particularly vulnerable to a sharp decline in income.

"The most vulnerable include those working in jobs more exposed to unemployment risk, such as casual workers, and those in industries most affected by the COVID-19 containment measures, such as accommodation and food services. 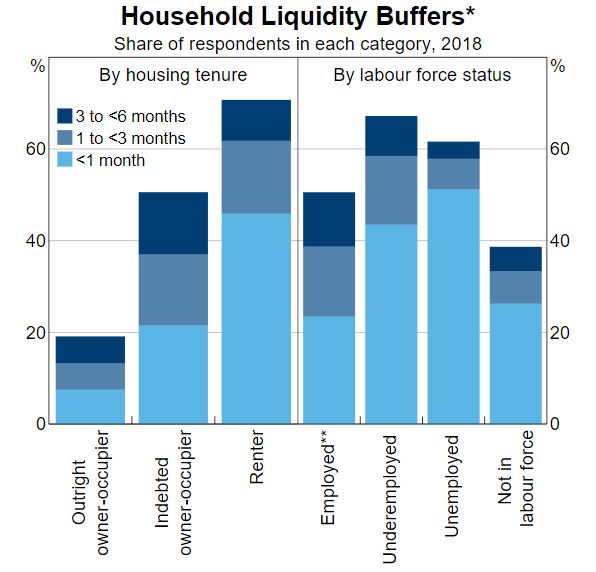 But the RBA said the $200 billion stimulus package, combined with cooperation from lenders, would see many households through the crisis who would have struggled otherwise.

"Repayment deferrals (‘holidays’) being offered by the banks and the Government's recently announced wage subsidy should both help avoid large increases in arrears," it said.

"More generally, tightened lending standards over the past five years or so have improved the quality of outstanding household debt while Government income support policies and access to superannuation balances for the worst-affected households will cushion falls in household income."

The bank also had an optimistic outlook for Australian businesses, stating that most had low levels of gearing and significant liquid assets which would help them weather the storm.

"Government and bank support will assist those businesses with sharp reductions in revenue, particularly those for whom income has completely dried up and small businesses with few assets that would otherwise be in a perilous position," it said.

"Commercial property prices have risen faster than rents in recent years given the decline in risk-free interest rates.

"Owners who are more highly leveraged could struggle if tenants are unable to pay rent, particularly in retail property given the very weak retail sector."

With auctions and open houses banned, the RBA echoed the sentiments of many and said there would be very little turnover in the housing market.

However, it would not comment on the effect of the pandemic on house prices.

"The turnaround in housing markets in the second half of last year reduced the risk that falling housing prices would result in widespread negative equity and larger potential losses for lenders.

"Most households now have substantial equity in their homes. It remains unclear how this will affect residential property prices."

The central bank concluded the Australian financial system entered the crisis in a strong position and urged major players to be ready to support the population throughout and after the dust settles.

"It is important that financial institutions remain strong so that they are able to support households and businesses during this difficult period and during the recovery once the health crisis has passed."