If there was any doubt it's a sellers market right now, new analysis by Domain has found that vendors are feeling so confident in the booming market right now that they're commanding even higher asking prices mid-sales campaign.

But the analysis also found the number of property listings with a revised higher asking price appears to have peaked in most capital cities, a sign the strong pace of price growth may be easing.

Domain data shows 9.3% of property listing prices in Sydney were increased last month, down from a peak of nearly 10% in March.

In Melbourne, 7.8% of homes for sale increased their asking price mid-campaign in April, down from 8.9% of March.

"Throughout the first three months of 2021 the median house price lifted $539. In Sydney and Canberra, it was the fastest quarterly acceleration of house prices in almost three decades," Dr Powell said.

"Buyers and sellers were transacting in a market that saw house prices rise by $1,145 a day in Sydney and $909 a day in Canberra.

"Accruing capital growth at this pace over a four-week sales campaign would add another $32,060 in Sydney and $25,452 in Canberra.

"This can be accentuated in a rapidly rising market as battling buyers become more likely to drive prices even higher. It is understandable that during a period of sharp median price increases more homes experience an asking price hike mid-campaign." 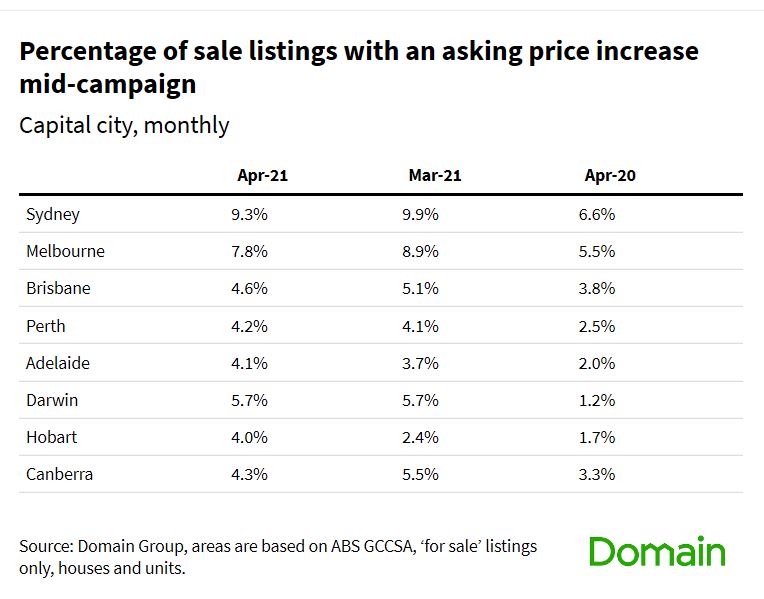 Areas with the biggest number of properties increasing their prices mid campaign were in pockets of inner-Sydney and Melbourne, with 14%

"The more expensive areas of Sydney and Melbourne have the highest percentage of asking price revisions upwards over April. This suggests the upper end of the market will continue to lead price growth in the coming months," Dr Powell said.

"Therefore, our regional property markets in comparison have historically gone through more steady changes and paces of growth compared with capital cities, which is playing out in the percentage of sale listings with an increased asking price mid-campaign."