The Westpac-Melbourne Institute Consumer Confidence Index fell away only slightly in January, showing the economy ‘may not be as weak as the data suggests’.

The Westpac-Melbourne Institute Consumer Confidence index continued its trend of marginal falls in January, dropping 2.1% from 104.3 reported in December to 102.2.

A score over 100 generally implies Australian consumers remain confident about the economy and their finances.

Westpac Chief Economist Bill Evans said this is a surprisingly solid result given the rapid spread of the Omicron COVID variant over the past month.

Consumer confidence increased in NSW (up 1.7%) and Victoria (up 4.1%), while posted significant falls in Queensland down 2.7%, Western Australia down 5.1% and South Australia down 3.9%.

Mr Evans puts this down to consumers in states impacted by ‘delta’ lockdowns appearing to be less unsettled by the rapid spread of the omicron variant than those in states experiencing their first major wave of COVID infections.

Where concern lies most prominent is Australian consumers outlook of their finances, with the ‘finances, next 12 months’ sub-index more pessimistic, falling 2.8% to 108.1.

"Nervousness would be consistent with the sharp deterioration in the economic outlook but may also reflect shifting expectations for interest rates," Mr Evans said.

Yet Australian consumers reported significant improvements in their finances relative to a year ago, with the sub-index lifting by 7.5% to 95.6, a nine-month high.

"That likely reflects a combination of improving incomes – particularly as labour markets rebound – wealth gains from a resurgent housing market and the accumulation of significant ‘reserves’ due to very high savings rates during lockdowns over the last two years," Mr Evans said. 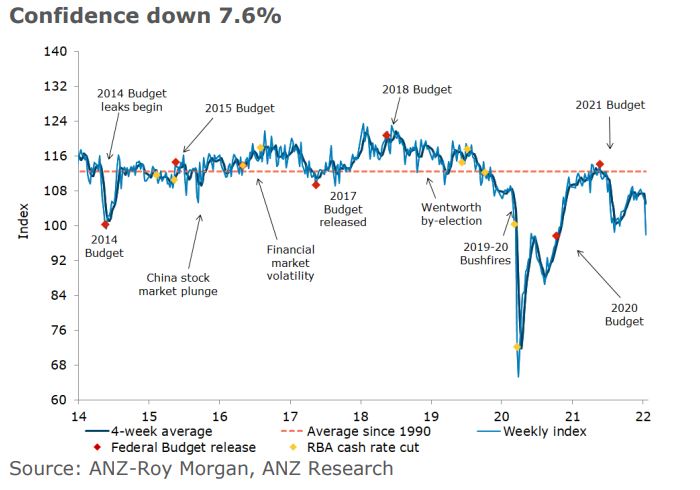 ANZ Head of Economics David Plank said confidence is now below the neutral level of 100 for all states and it is also lower than the level during the Delta surge.

"Consumer confidence readings are usually positive during the month of January and the level of 97.9 is the weakest January result since 1992, when the Australian economy was experiencing sharply rising unemployment," Mr Plank said.

"We don’t think the economy is as weak as these data might suggest, with the shock of the Omicron surge and strains on testing capability the key drivers of the fall rather than underlying economic conditions."

Image by Mick Haupt via Unsplash.