Insolvency numbers are on the rise in Sydney and Melbourne, and one expert has pointed to the potential 'tsunami' in the next six months.

The Australian Financial Security Authority (AFSA) has released its regional insolvency statistics for the June quarter, which revealed slight increases in insolvency numbers across Sydney and Melbourne.

Insolvency numbers fell throughout the rest of Victoria and New South Wales, by 10.4% and 5.8% respectively.

Despite this, insolvency experts have said that insolvency numbers are very low, with personal insolvency levels at "around half" what they were pre-pandemic.

Malcom Howell, Jirsch Sutherland Partner and Bankruptcy Trustee, attributes this to the government support over the last 18 months, as well as the leniency in debt collection measures.

However, he says that debts are mounting, and that the pressure will build up.

"I expect to see a continual, steady increase in personal and corporate insolvencies over the next six-plus months but the timing of the 'tsunami' is hard to predict," Mr Howell told Savings.com.au.

"What we will see is an increase in pressures on businesses, as they struggle to get staff and supplies. Supply chains are being throttled by the pandemic and lockdowns, and there’s a severe shortage in a number of industries - building and construction supplies - that will provide immense stress on businesses."

While Brisbane saw a decline, the rest of Queensland saw a rise of 39 (9.9%) of personal insolvencies. Townsville saw the most people declaring insolvency (56). 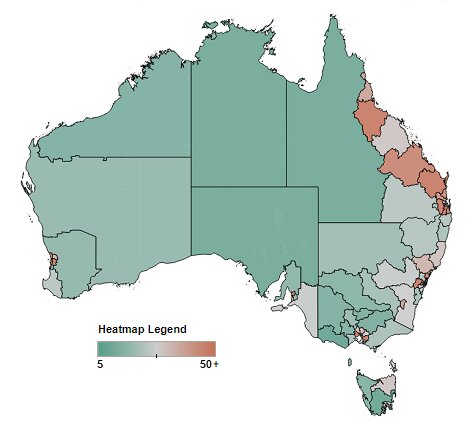 The most common industries these people worked in were: construction, retail trade, and health care and social assistance.

Image by Rose Lamond on Unsplash