Retail jobs and hours worked down despite penalty rate cuts The promise of increased hours and job listings as a result of 2017 cuts to penalty rates has gone unfulfilled.

That's according to new research from Indeed Hiring Lab, which found that hours worked in retail have declined and were flat in hospitality since the 2017 penalty rate cuts, defying broader trends.

But Indeed data shows retail hours worked have fallen 2.8% since June 2017, while they rose slightly in accommodation and food services.

Indeed Hiring Lab Economist Callam Pickering said both sectors underperformed, with hours worked across other industries up 6.2% over the same period.

"Employment in both industries is up slightly compared with June 2017, but has underperformed the broader economy," Mr Pickering said.

"That creates a double whammy for many workers — fewer hours per person and reduced penalty rates." 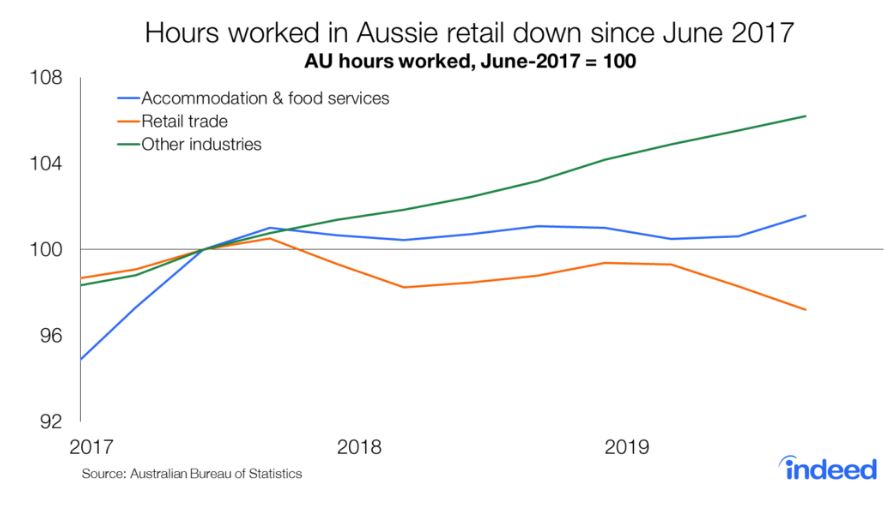 "Taking into account both the minimum wage hike and reduced penalty rates, just how much workers are better or worse off depends on the share of work they do outside normal hours."

In addition to this, the amount of job postings mentioning penalty rates have barely changed.

It was assumed that since penalty rate cuts were justified on the basis that they would create more jobs, job postings would rise.

Consequently, job descriptions that contain the phrase 'penalty rates' could be used to attract job seekers, given its desirable nature.

Up until recently, there had been no evidence of greater usage of the term in job postings.

However Mr Pickering said the latter half of 2019 had seen this change.

"Job postings noting penalty rates were around 15% higher in the December quarter than the 2016-17 average." 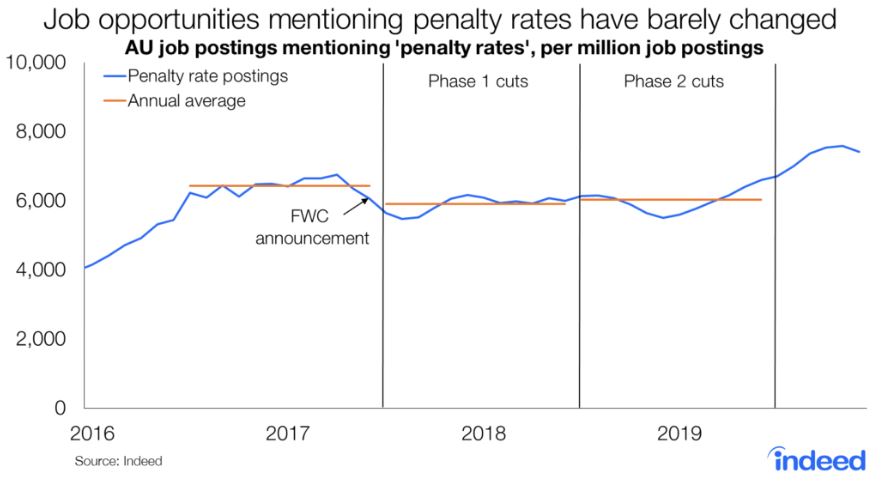 These results can't solely be attributed to greed; Australia's retail economy has struggled immensely over the last few years and may have stemmed new job hires, independent of penalty rate cuts.

To see whether they contributed, Indeed examined Australian business profitability.

Since penalty rates were reduced, profitability of sole proprietorship and partnerships was down almost 28% in retail and 11% in accommodation and food services, defying the broader national trend.

Profitability for corporations in the same sectors was up, but this was achieved by cost-cutting in areas other than wages rather than by taking advantage of penalty rate cuts. 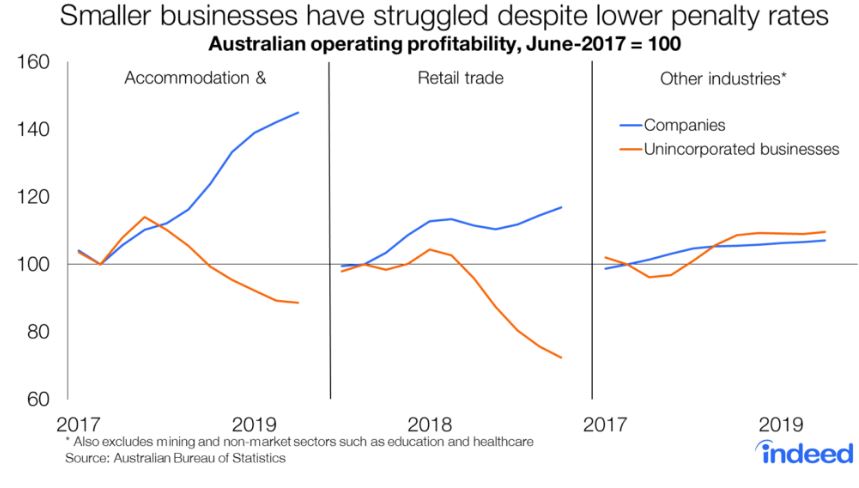 Mr Pickering said that small business have endured the worst economic conditions seen in a quarter century and penalty rate reductions may have saved jobs.

"It is impossible to separate the impact of changes to penalty rates from the broader economic conditions that have shaped the retail and hospitality sectors in recent years," he said.

"But given the dire situation faced by small businesses, it is possible that cutting penalty rates saved some jobs even if the reductions didn’t create many new ones."