Australians are addicted to a good bargain, but the fear of missing out (FOMO) on a good deal is driving people to make impulse purchases.

Seven in 10 Australians said they’re always on the lookout for discounts when shopping online, according to PayPal’s latest mobile commerce report.

Younger shoppers were even more inclined to be on the lookout for a sale according to report, with 77% of Gen Z and 73% of Gen Y saying they are constantly looking for bargains.

One-in-six (16%) shoppers aged between 18-36 even went so far as to say they were “addicted to shopping the sales”.

Interestingly, 74% of affluent shoppers on incomes of over $150,000 p.a said they were always on the lookout for sales when shopping.

Almost 50% of Australians said they waited until an item was on sale before buying it. That number rises again for younger shoppers, with 73% of Gen Z and 65% of Gen Y saying they waited for an item to go on sale. 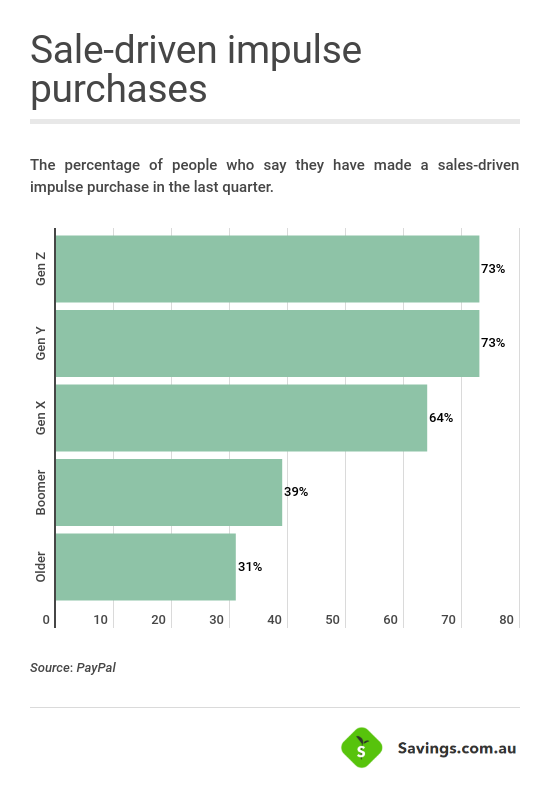 But the fear of missing out on a bargain is also driving Australians to make unbudgeted for impulse purchases, with 18% of consumers saying they feel like they’re losing money if they don’t buy an item when it’s on sale.

Over half (58%) of Australians said they have made an impulse purchase online only because the item was on sale. The report found the average shopper spent $108 without planning to on discounted items.

One-in-five (20%) of consumers said they made an impulse purchase after receiving a push notification or email about a sale.

Online the preferred way to shop

Most Australians (57%) prefer to shop the sales online rather than in store.

That number rises for younger shoppers, with 63% of Gen Z and 65% of Gen Y saying they prefer to shop online, with most preferring to use their mobiles to shop the sales rather than their computers.

PayPal director Peter Cowan said the launch of 5G is likely to accelerate the shift away from traditional stores towards e-commerce by making download and checkout times faster, and allowing customers to experiment with new media shopping experiences like Shoppable Video and Visual Search.

“We think it has the opportunity to make online shopping a bit more fun,” he said. 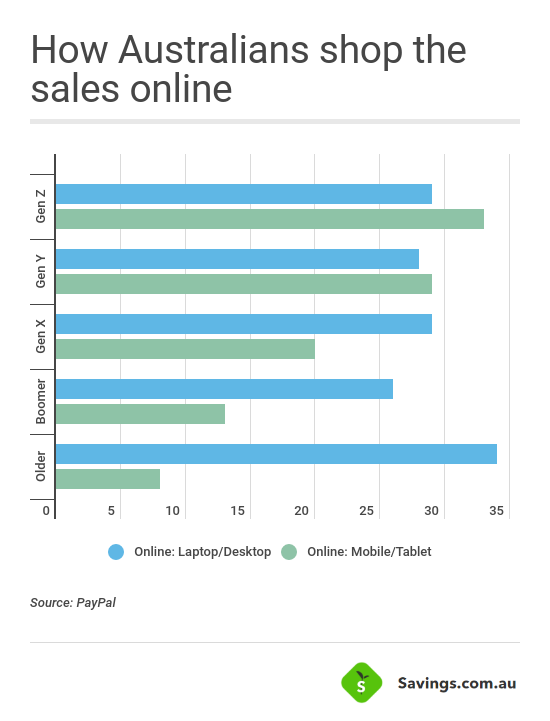 An e-commerce report released by Australia Post shows a boom in online shopping, with the number of purchases rising by 20.2% over the past year.

According to the report, Australians spent an estimated $27.5 billion shopping online last year.

Sales event such as Black Friday and Cyber Monday, and the rise of buy now, pay later platforms are behind the online shopping boom.

“Australians are getting online more and more, and changing the face of shopping. Millennials will always want it quickly, want it now and want it cheap,” he said.

“So you get these sales events, buy now, pay later all coming together, which is really driving online shopping at the moment.”

According to the report, buy now, pay later platforms like Afterpay and Zip accounted for 6.7% of all online sales in 2017, dominated by millennial women (79%) buying clothes.