That's according to the Australian Bureau of Statistics' (ABS) lending indicators data for April, which also shows another record month for owner occupied housing loans.

“The value of new loan commitments for owner occupier housing reached another all-time high in April 2021, up 4.3% to $23.0 billion," ABS head of finance and wealth Katherine Keenan said.

“The rise in owner occupier lending was driven by increased loan commitments for existing dwellings, which rose 9.2%."

Calculations from ANZ's research team show that owner occupied lending is now 55% above the average level of lending over the five years to the pandemic.

"Both these cities saw lower vacancy rates in April compared to March, and Sydney in particular has a convincing downward trend in vacancies.

"This is a positive sign for investors in those cities, whose borrowing may signal optimism about the continuing momentum of the labour market. 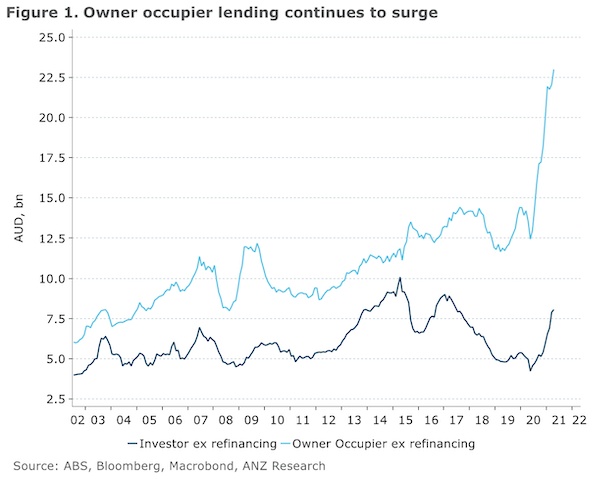 There was some tapering off in the construction sector, with the ABS putting that down to the end of HomeBuilder.

"Loan commitments to owner occupiers for the construction of new dwellings fell by 11.4%, following a fall of 14.8% in March," Ms Keenan said.

"These were the first monthly declines since the Homebuilder grant was introduced in June 2020. However, the value of construction commitments remained at a high level.”

“Lending for renovations continues to be strong. The value of loans for alterations and additions is up by 66.7% in the three months to April 2021 compared to the same time last year," she said.

“This is the first ABS data to show that we are past the peak in the surge in construction due to HomeBuilder.