The report's measure for housing affordability - the proportion of income required to meet loan repayments - increased nationally by 0.9% to 34.8%.

Mortgage stress is commonly defined as when a household is spending more than 30% of their gross (pre-tax) income on home loan repayments.

REIA President Adrian Kelly said the property market has been lifted up by first home buyers racing to take advantage of favourable conditions and enter the market.

"The market defied the doomsday predictions with median house prices rising across the country in 2020 with demand driven mostly from first home buyers," Mr Kelly said.

“Australian first home buyers increased their market share by 50.4% over 2020, motivated by low interest rates and the range of first-home buyer incentives on offer."

The number of first home buyers increased to over 45,000, and they now make up 41.9% of owner occupier dwelling commitments.

“Seeing this trend in conversion to home ownership is particularly great news given the challenges many tenants and investors faced over the pandemic however surging house prices could see housing affordability obliterated unless measures to improve supply are implemented," Mr Kelly said.

"This particularly applies to regional parts of Australia.” 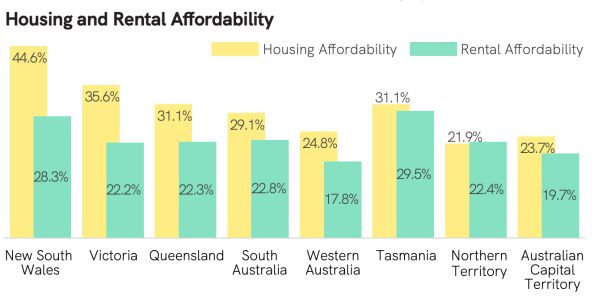 While housing affordability was better year-on-year by 0.7% nationally, it was worse in New South Wales where the proportion of income required to meet mortgage repayments is now 44.6%, making it the "least affordable state".

Meanwhile, the Northern Territory is now the most affordable with the proportion of income required to meet loan repayments 21.9%.

"It is now more affordable to buy than rent in the Northern Territory,” Mr Kelly said.

See also: Is Australia in a housing bubble?

The exodus from capital cities to regional areas during COVID-19 has seen rental vacancy rates tighten to as low as 0.1% in some parts, pushing up rental prices as tenants compete for a limited supply of properties.

The report found the proportion of income required to meet rent repayments increased to 24.0% nationally, up 0.4% over the past 12 months.

Rental stress is commonly defined as spending more than 30% of income on rent, though the sweet spot is generally 25%.

See also: How much should you spend on rent?

“Tasmania is now the least affordable state to rent with the proportion of income required to meet rent repayments now a staggering 29.5%, 5.5 percentage points higher than the national level," Mr Kelly said.

“Western Australia is the most affordable, despite the proportion of income required to meet median rents increasing to 17.8%."

It comes as new Domain research revealed competition between tenants will remain fierce as rental vacancy rates remain tight, with the national vacancy rate sitting at 1.9%.

Renters in Melbourne and Sydney are likely to have the most luck finding a rental property.

"In Sydney and Melbourne, the general rule of thumb is that the closer you get to the city, the higher the vacancy rate,” she said.

In the Melbourne CBD, the vacancy rate was a whopping 7.6% in January according to SQM research, while Sydney CBD had a vacancy rate of 5.8%.

Of the remaining capitals, only Brisbane had a vacancy rate above 1%.

"Most of our capital cities remain tight and remain competitive for tenants and what we can expect is rents are going to rise," Dr Powell said.

Photo by Arvin Wiyono on Unsplash