The latest Australian Bureau of Statistics (ABS) lending indicators data for February shows a 0.4% decline in new loan approvals, seasonally adjusted, to a total of $28.6 billion.

This is the first fall recorded since May 2020, and recent surges in loan commitments ensured lending remains extremely high despite this setback.

So while owner occupied lending fell 1.8% over the month, investment lending rose 4.5% to reach 31.6% higher than its level a year prior.

Construction lending increased 4.4% for new dwellings as more than 10,000 were approved, which represents an enormous 147% and 165.6% yearly rise in the value and number of new constructions respectively.

“The value of loan commitments for the construction of new dwellings rose 4.4%, continuing a period of record rises since July 2020. Although the HomeBuilder grant, introduced in June 2020, was reduced from 1 January 2021, it was made more widely available to borrowers in NSW and Victoria through increased price caps on new build contracts.

"The time taken to process home loans meant that construction loan applications made in late 2020, prior to these changes, also contributed to loan commitments reported in February.” 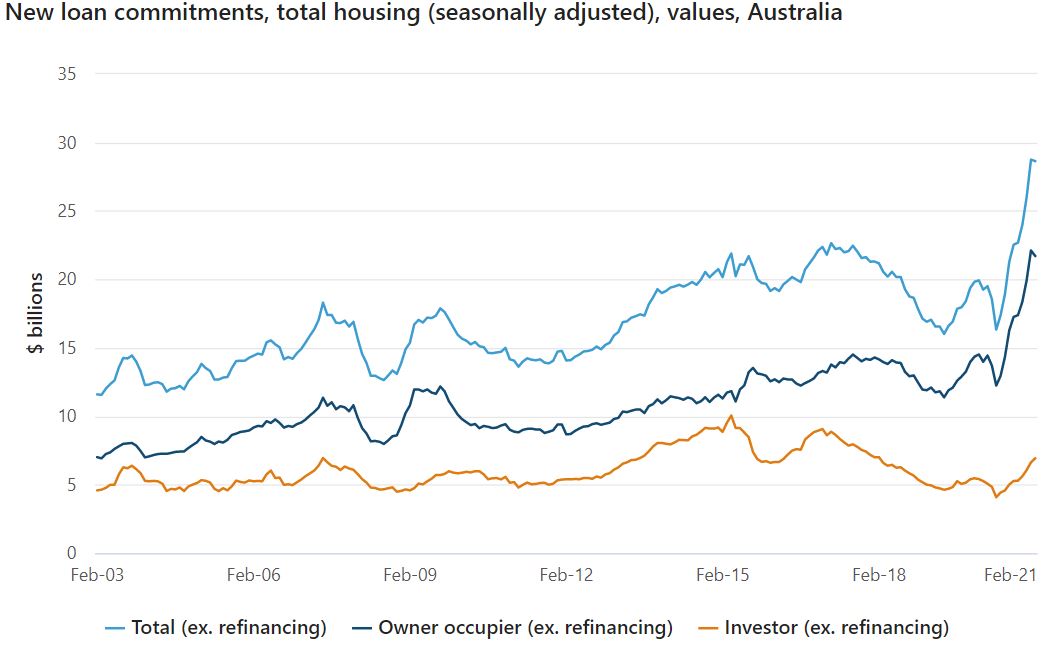 Loan approvals for first home buyers also fell for the first time since May 2020, having last month reached a 12-year peak.

The number of owner occupier first home buyer loan commitments fell 3.3% to 16,117 in February 2021, but remain near those historically high levels, up 65.8% year on year.

First home buyers now account for 35.1% of all owner occupied lending commitments, down from 36.5% the previous month.

More first home buyers appear to be investing first (aka rentvesting), as the number of these investors being approved rose 4% over the month.

The number of dwellings approved rose 21.6% in February (seasonally adjusted), after falling 19.4% in January.

Private house approvals rose 15.1%, and Director of Construction Statistics at the ABS Bill Becker said this exceeded the previous record-high seen in December 2020.

"Since the introduction of the Homebuilder grant in June 2020, private house approvals have risen by almost 70%, he said.

While the ABS attributes these increases to HomeBuilder, Westpac Senior Economist Matthew Hassan said its month to month impact is proving difficult to pinpoint.

"Grants available under the scheme were reduced from $25k to $15k at the start of 2021, the move likely accounting for the 11.8% pull-back in detached house approvals in Jan. At the same time, however, some qualifying criteria, including time limits on commencement, were also relaxed, broadening eligibility," Mr Hassan said.

"The whole scheme expires on Mar 31, although the deadline for submissions has been extended to Apr 14 (these must still relate to contracts signed prior to Mar 31).

"We can only surmise that the scheme was still generating substantial approval activity in Feb, and that any unwind and associated weakness is still to come.

"Exactly when it comes and how large it will be remains highly uncertain."

"The Feb rebound is clearly surprising and locks in a stronger near term outlook for new building. However, we remain wary of unwinding pull-forward effects associated with the HomeBuilder scheme in the months ahead," he said.

Photo via iMike Stettler on Unsplash