Australia’s median land lot size shrank to from 422 to 420 square metres in 2018, but that didn’t stop the median lot price from rising around the country.

The Urban Development Institute of Australia’s (UDIA) annual State of the Land report for 2019 reported rising median lot pricing across most of the nation’s key greenfield markets.

And despite significant falls in the value of property in Sydney, the Harbour City’s median land lot price still rose 3% to hit $489,000 by the end of 2018.

A smaller growth in land lot pricing of 1.3% was felt in South-East Queensland (SEQ) to finish the year at $267,000, while Adelaide experienced a decade-high annual increase in pricing.

The median land lot price in the City of Churches rose 5.2% across 2018, although it remains Australia’s most affordable market for land at under $176,000.

Perth’s land market continued to head in the opposite direction to the other markets – experiencing its fourth consecutive year of median lot price falls, sliding 2.1% in 2018. 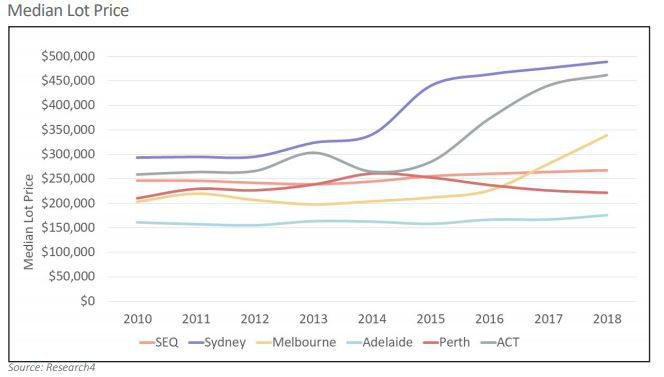 But land lot sizes fell in every market analysed bar the Australian Capital Territory’s (2% increase), which maintained its mantle of having the largest median lot size at 507 square metres.

In comparison, Perth’s lot sizes are just 375 square metres – the smallest in the country.

Not far ahead of Perth in the size department is Sydney, whose median lot size fell a whopping 24% over the year to just 379 square metres. 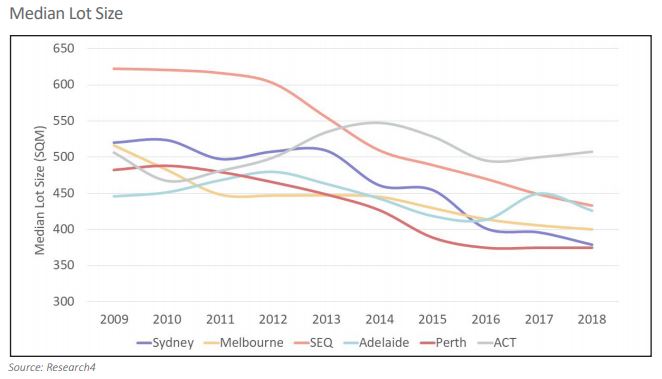 The results of the UDIA’s report mirror the Housing Industry Association and  findings earlier in the month that land lot prices have risen despite falling demand.

This falling demand has seen a 20% drop in the production of residential land lots in 2018, after five straight years of year-on-year growth.

This drop was led by Sydney, whose Greenfield market recorded a 43% decline in lot production to only 7,190 releases over 2018.

According to the UDIA report, this was the lowest annual number of lots released in Sydney since 2013.