Photo by Parag Gaikwad on Unsplash

The number of properties coming onto the market in Melbourne has soared to its highest level since March, skyrocketing by 330% since private inspections resumed in late September.

CoreLogic data shows the number of new property listings added to the market for sale increased by 330% in the four weeks ending 18th October.

This represents an increase in new listings from 1,606 in the four weeks to September 20th to nearly 7,000 over the period to October 18th.

"After months of restrictions, pent-up demand from sellers has accumulated so much, that more stock was recently added for sale in Melbourne than any other capital city region," Ms Owen said. 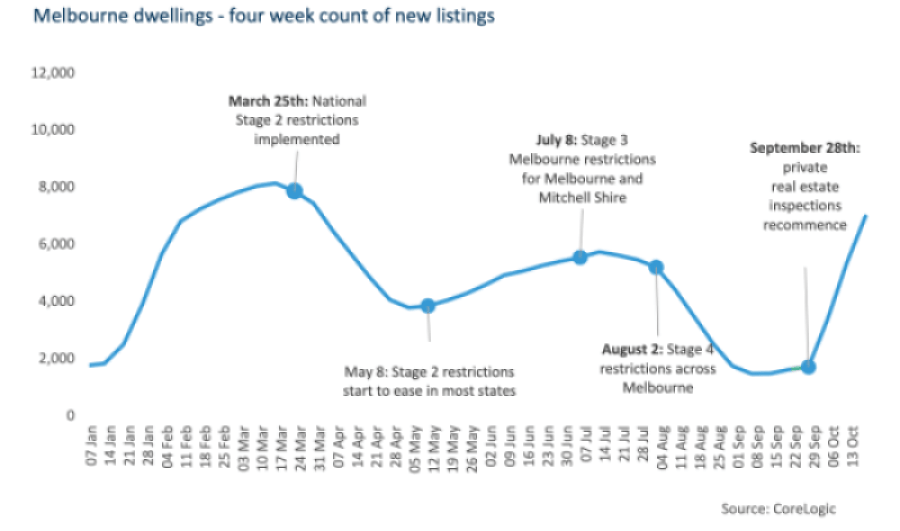 Ms Owen said it's possible part of the surge in new property listings could be a sign of distressed sales.

"A significant increase in new stock across Melbourne can mean different things for the state of the market. ‘Forced’ selling was a possibility from the pandemic, as significant job losses across Victoria may have limited the ability of some households to keep paying their mortgage," Ms Owen said.

"The latest financial stability review from the RBA noted that October was the period most mortgage deferrals were set to expire, which may have contributed to an increase in new listings in recent weeks. However, CoreLogic data does not point to a significant increase in mortgagee in possession events across Victoria."

Data from the Australian Banking Association (ABA) shows repayments have resumed on almost half (45%) of all deferred mortgages.

But recent data from Commonwealth Bank showed 14% of deferred home loans had at least one borrower still receiving JobSeeker payments, which could mean borrowers may struggle to meet their repayments beyond the four-month mortgage deferral extension.

Ms Owen said the large increase in property listings could also point to a market rebound as vendors sell to meet rising demand.

"One way to assess the state of the market through listings data is to observe how total listing volumes are tracking against new listings. New listings rose faster than total listings across Melbourne in the four weeks ending 18th of October.

"New stock added to market increased by around 5,370 properties, but the change in total stock was only 4,790. This suggests at least some stock on market has been absorbed over the past four weeks."

Other indicators could signal an improvement in property market conditions. In the week ending 18th of October, the final auction clearance rate was 60.2% in Melbourne, which Ms Owen said was achieved alongside the highest volume of auctions seen in two months.

"Over the past month, the rate of decline across Melbourne dwelling values has also eased. It is clear that even after long, strict restrictions, vendors are keen to sell," Ms Owen said.

"However, due to the lag between an initial property listing and a sale, it will be a few weeks before we can understand how strong buyer appetite is."