Photo by danny howe on Unsplash

The median value of Australian property continued to slide over February, albeit at a slower pace than in January and December, according to new data.

CoreLogic head of research Tim Lawless said the February results marked a “subtle improvement in the rate of decline” for the housing market.

“However, the housing market downturn is now more widespread geographically and we aren’t seeing any indicators pointing to the market bottoming out just yet,” Mr Lawless said.

This highlights the fact that the majority of Aussie homeowners still have a lot of equity in their homes, which many tap into to buy other properties. 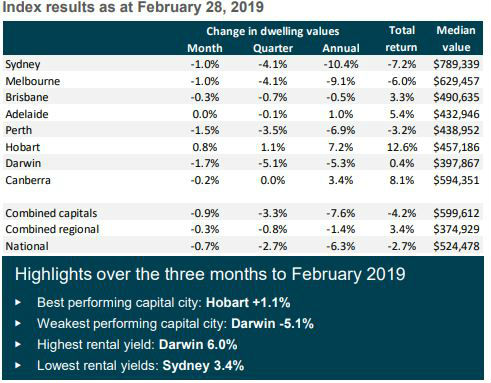 Mr Lawless said the weakening housing market conditions across regions that had until recently been experiencing sustainable value rises is a sign that tighter credit conditions are having an effect on buyer activity.

“While a slowdown in investment was a key driver of slowing housing markets since 2015, the recent decline in  lending is far more significant considering  lending is more than twice the value of investment lending,” Mr Lawless said.

“Stricter lending standards are a logical outcome following the royal commission and we are likely in the early phases of a ‘new normal’ for mortgage lending where borrowers will face closer scrutiny around their expenses and ability to service a loan and conversion rates on loan applications are likely to remain lower than they have been over prior years.”