ANZ economists have forecast inflation and wage growth to be lifted by early 2023, a sign the Reserve Bank could increase the cash rate earlier than expected.

The Reserve Bank's cash rate has been 10 basis points (0.10%) since November, and RBA Governor Dr Philip Lowe has consistently maintained that the cash rate will not rise until wage growth and inflation is sustained above 3% and 2% respectively.

The RBA does not forecast that to happen until 2024, however, ANZ economists today forecast wages growth will "accelerate" to 3% and inflation will be above 2% by late 2022.

They also predict unemployment will "drop sharply" to 4.8% by the last quarter of this year before dropping to 4.2% by the end of 2023.

These are the ingredients for the RBA to raise the cash rate in 2023, and are consistent with economic forecasts released in New Zealand, too. 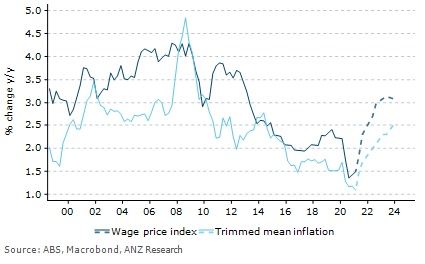 An RBA rate hike in 2022 would constitute the first increase in 12 years, however ANZ economists said even with a cash rate of 0.5%, real wholesale interest rates would still effectively be negative.

"Fiscal policy in Australia will be winding back, but measures put in place to support housing and investment will support growth in 2021 and 2022, and public spending growth should remain strong," they said.

"The global economic backdrop will be particularly supportive, with massive fiscal stimulus driving a robust recovery in the US and supporting a strong global upswing.

"All of these factors will provide positive impetus for Australian growth."

Despite the economy bouncing back, the Westpac-Melbourne Institute consumer sentiment index shows confidence has 'faded' to 107.2 in June, down 5.2% from 113.1 in May.

"The latest fall in June is almost certainly due to concerns around the two-week lockdown in Melbourne," he said.

"The Index is now back at the level we saw back in January when the country was impacted by significant lockdowns in parts of Sydney and Queensland.

"Resilience in NSW, our largest state, will be very important for supporting national sentiment and, in turn, sustaining the economic recovery."

The biggest monthly falls in the index were seen in the 'Economic conditions next 12 months' category, down 10.3%.

This was followed by 'Family finances', down 8.5%.

The latest United States inflation data will be released tomorrow (Australian time), and economists predict it will be 4.7% annualised.

Excluding 'volatile' food and energy prices, economists predict inflation will jump 3.5% in May, marking the biggest jump since 1993, according to the Financial Times.

Through the first quarter of 2021, US wage growth was the fastest in 20 years.

Over to America's Hat, Canada, and the central bank there maintained its 0.25% cash rate on Wednesday, citing that the country's 3% inflation was based on 'temporary factors'.

"[The economy has] considerable excess capacity and the recovery continues to require extraordinary monetary policy support," the Bank of Canada's statement said.

"We remain committed to holding the policy interest rate at the effective lower bound until economic slack is absorbed so that the 2% inflation target is sustainably achieved.

"In the Bank’s April projection, this happens sometime in the second half of 2022."

Overnight, the Bank of England's chief economist Andy Haldane raised 'concerns' about the risks of higher inflation in relation to low interest rates.