Rents plummet in Sydney and Melbourne amid record oversupply of properties Photo by Danny Howe on Unsplash

An oversupply of properties is making it cheaper to rent in Australia's biggest capital cities.

Loss of income and travel restrictions contributed to the excess stock levels, causing a sharp decline in asking rents.

However, the oversupply was confined to Sydney and Melbourne, with all other capital cities seeing a drop in total rental listings.

ANZ economist Felicity Emmett said the fall in demand for rental properties in these areas was due to their 'service economies', as people working in industries hardest hit by COVID-19 were also most likely to rent.

“Nearly 40% of people who work in the accommodation and food services sectors rent,” Ms Emmett said.

“Between the weeks ending 14 March and 27 June, 21% of hospitality workers lost their jobs, compared to an average of 6% across all industries.”

The report found rental demand in these areas would have dropped even further if not for JobKeeper and JobSeeker.

Although job losses had been more severe across the 'service economies', these sectors had a better recovery than total combined sectors over May and June, signalling some stabilising demand in the rental market. 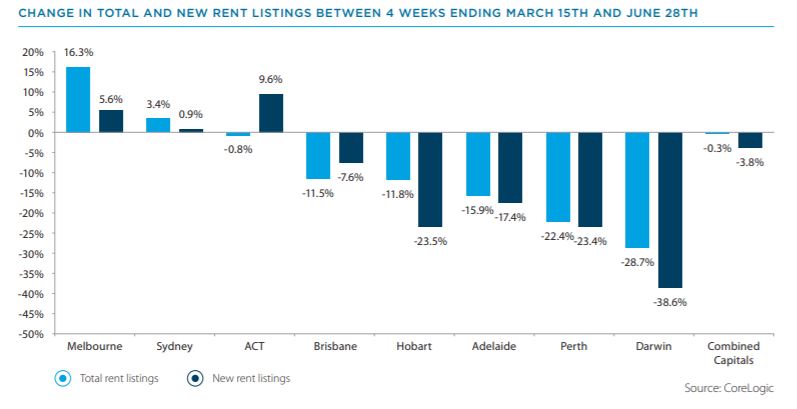 The oversupply of inner-city stock pushed rental values down as much as 7% in Sydney suburbs Haymarket and Bangaroo as well as Southbank in Melbourne.

“The oversupply of rental stock since March has been largely confined to inner-city areas in Melbourne and Sydney, while all other capital cities have experienced a decline,” Ms Owen said.

“There are still opportunities for investors where rental markets have continued to tighten and rental values have increased, including select suburbs across Perth and Hobart where Airbnb stock may be reverted back to the short term rental market as inter-state travel resumes.”

Weaker conditions for units compared to houses meant unit rentals experienced their biggest price drop in more than 15 years, however the performance depended upon the number of bedrooms.

Domain Senior Research Analyst, Dr Nicola Powell, said the damage to the rental market from the pandemic was being felt nationwide.

"Rental prices fell across most major capitals, illustrating no city was immune from the impact of the coronavirus pandemic, with Sydney and Hobart units recording the steepest quarterly fall on record," Dr Powell said.

"Asking rents for one-bedroom units in Sydney and Melbourne experienced the most significant falls over the June quarter, followed by two-bedrooms.

"Given a large part of Hobart’s economy is driven by tourism, many landlords had been lured by the lucrative incomes of short-term holiday lets.

"The pandemic has been detrimental for the tourism industry, and landlords were quick to seek longer-term tenants in order to retain cash flow during this time."