Photo by Alex Boyd on Unsplash

A new report has found strong evidence to suggest shared living could be a solution to financial stress and loneliness in older Australians.

PRD Research found many Australians aged 55 and over, particularly renters, were struggling financially due to low incomes and rent increases.

It also found loneliness affected both owner-occupiers and renters, with one in four Australians experiencing loneliness, especially widowed, divorced or single individuals.

The report said shared living was already a popular arrangement for young people and if more older people considered it, it could result in new property asset classes.

The report found renters were more inclined to consider shared living than owner-occupiers, but both could reap the benefits of sharing a home.

"All participants that were independently renting indicated that splitting the rent and operational expenses with another tenant is an effective way of easing financial struggles and stress," the report said.

"In comparison, the majority of owner-occupiers were less positively inclined towards the idea of shared living and were instead re-entering or remaining in the labour force in order to sustain their financial positions.

"However, owner-occupiers have indicated loneliness as a potential reason were they to consider shared living."

Survey respondents who were already in a shared living environment said the main reason behind their decision was affordability, but the move had helped in a variety of other ways.

"Furthermore, since entering shared living, these participants expressed that their financial struggles had eased, reduced their isolation, and in turn was allowing them to enjoy retirement more."

Maintaining rent an "unrealistic task" for many

Many study participants said they hadn't considered shared living as a way to alleviate financial stress, but were open to the idea.

"Yes, shared living is something I would be open to if it was the right person. It can get a bit lonely sometimes, and reducing operational expenses would be a major help," a 65 year old female participant said.

"Struggling to keep up with the rental market, still manage to afford but not satisfied with the current property. Would be able to stay in somewhere a bit more liveable if I had help with the rent," a 75 year old male said. 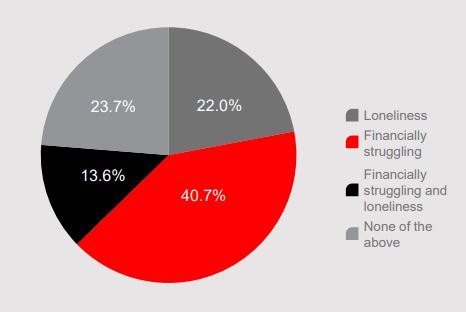 The study found for over 55s, maintaining rent on a single, and often government provided income, was an unrealistic task for many.

"In addition, studies have shown that the growing number of older Australians aged 55 and over in the rental market is increasing and that median rental prices have increased in recent years," the report said.

"This is a concern as other research has shown that the stress of not owning your own home can lead to poor physical and mental health."

Almost 60% of survey respondents said 'yes' to shared living, with the majority of these renters.

Those who said no said they were secure, not struggling, or had a lack of education on the topic, something the report highlighted the need for greater awareness on.