Photo by Kevin Bosc on Unsplash

CBDs and holiday spots have been hit hard by COVID-19 lockdowns, with rental vacancies surging nationally.

SQM Research found the national residential rental vacancy rate recorded a large one month jump from 2.0% in March to 2.6% in April.

The largest rises were found in capital city CBD locations, particularly for the Sydney CBD where the vacancy rate blew out to 13.8%, a record high on the SQM series.

Melbourne didn't fare much better, with Southbank vacancy rates rising to 13.0%, while the CBD rose to 7.6%.

Other holiday locations have also suffered with Surfers Paradise recording a vacancy rate of 8.5% and Noosa blowing out to 6.8%.

All states recorded increases in vacancy rates with the exception of Darwin which recorded a marginal 0.1% decline.

Managing Director of SQM Research Louis Christopher said the surge in rental vacancies could be attributed to border closures and AirBnBs coming onto the rental market.

“This is one of the largest one month rises ever recorded on our vacancy rates series," Mr Christopher said.

"The blow out in rental vacancy rates for the major CBDs suggests a mass exodus of tenants occurred over the course of March and April.

"This might be attributed to the significant loss in employment in our CBDs plus the drop off in international students.

"We are well aware of a surge in short term accommodation now being advertised for long term leasing."

As vacancy rates surged, asking rents dropped, with capital city asking rents decreasing 1.3% to $537 per week for houses and remained stable at $428 per week units for the week ending 12 May.

National combined rates have now recorded a 12 month decrease of 3.1%.

Sydney, Melbourne and Perth recorded decreases in asking rents for both houses and units over the month.

Adelaide bucked the trend and recorded rent increases for both houses and units of 0.1% and 1.4% respectively. 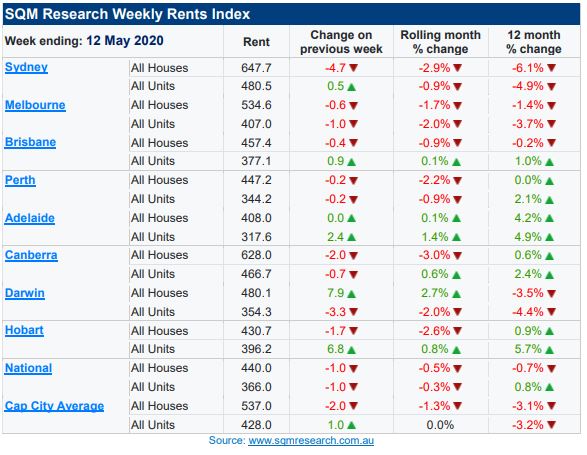 "If it is sustained throughout the course of the year, then we can expect far deeper falls in rents which will be good news for tenants but a disaster for landlords," he said.

"There will also be economic consequences with further sharp falls in building approvals likely; thereby risking a major depression in our residential construction sector as well as the rather obvious risks for housing prices.”

"With recent changes to Australia’s economic outlook due to COVID-19, we are making some temporary adjustments to our home lending criteria," a Westpac spokeswoman said.

"These updates will help reduce risk for home loan applicants in some affected industries and areas, through measures such as lowering the maximum loan to value ratio."

Westpac also announced self-employed borrowers taking out new loans would be allowed a maximum LVR of 80%, or 85% for some medical workers.

Previously the bank had allowed owner-occupiers who are self-employed to borrow up to 95% of a property's value, or 90% for investors.

Westpac said the changes were temporary, as it looked to stem massive losses as a result of COVID-19.