Sydney has come in third for most unaffordable housing globally, behind Hong Kong and Vancouver.

Melbourne was rated the sixth most unaffordable city in the world for housing affordability, behind Auckland and Toronto but ahead of San Francisco, London, and Honolulu.

"In this year of the global pandemic and lockdowns, it is not surprising that housing affordability — given the large influx of new buyers, particularly in suburban and outlying areas — has continued to deteriorate," Mr Cox said.

"As a result many low-income and middle-income households who already have suffered the worst consequences from housing inflation will see their standards of living further decline."

Last year, regional housing values tripled the growth of their capital city counterparts, according to CoreLogic, which Mr Cox said may help to bring down prices in unaffordable markets.

"The affordability issue is particularly critical due to the strong increase in remote working (telework) during the pandemic which is accelerating the movement to more affordable places," he said.

"It will likely also help flatten or even reduce prices in the highest cost housing markets as other households seek less costly housing elsewhere."

The report found the deterioration in housing affordability represented an existential threat to the middle-income household.

"Higher housing costs relative to incomes are strongly correlated with higher overall costs of living and thus lower standards of living," it found.

"In the United States more than 85% of cost of living differences between metropolitan areas are reflected in housing cost differences.

"Similarly, Bloomberg reports that nearly all of London’s higher cost of living relative to the rest of the nation is associated with higher housing costs."

In a separate report, the Organisation for Economic Co-operation and Development (OECD) found “housing has been the main driver of rising middle-class expenditure,” with the largest increases in the costs of owning a home rather than renting.

“…the cost of essential parts of the middle-class lifestyle have increased faster than inflation; house prices have been growing three times faster than household median income over the last two decades," the OECD said.

The pandemic has only served to worsen conditions, with the report finding house prices had escalated, even though incomes had dropped among middle-income households.

"This is in large measure a result of substituting telework for physical commuting, which gave households the flexibility to seek new housing with more space, indoors and outdoors. This rapidly developing demand shock drove house prices up."

Working from home "a ray of hope?"

Despite driving up housing costs, many households were shielded in part from the fallout from COVID thanks to the working-from-home (WFH) shift.

The report noted that internet was now more important than a train line, in a shift that happened in days which in normal circumstances could've taken decades. 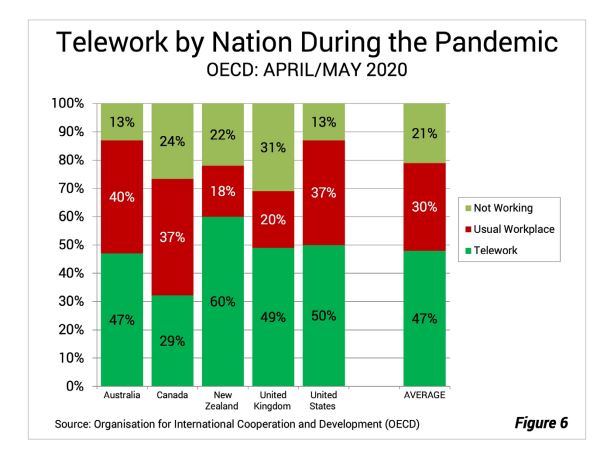 Mr Cox said greater remote working could begin to remove housing as a source of inequality.

"This could reduce housing demand in the least affordable areas, providing relief at every price point, including for many middle-income households whose living standards have declined as house prices have raced ahead of incomes," he said.

"It provides the global middle class a ray of hope."

Photo by Fidel Fernando on Unsplash