The 30 Australian locations tipped to become working from home hotspots

Photo by Shubham Sharma on Unsplash

New analysis has revealed which towns may be the biggest winners of the working from home revolution.

“A significant 13.4% of Byron’s workforce nominated ‘home’ as their primary work address at the 2016 Census. That is 3-times the national average of 4.7%,” Propertyology Head of Research Simon Pressley said.

Mr Pressley also pointed to the ease of access Byron Bay had to nearby cities like Brisbane and the Gold Coast, as well as the beach lifestyle it offered.

“It’s no coincidence that Byron’s airport passenger volumes have exploded over the last 20-years," he said.

Byron has one of the largest WFH cohorts in the country, despite only having a population of 35,000, and also boasts the highest median house price in the country ($995,000 in June 2020).

“Over the last 20-years, no Australian location, capital city or region, had a higher average annual rate of capital growth than Byron," Mr Pressley said.

"One shouldn’t underestimate the role that work-from-home played in this outcome.” 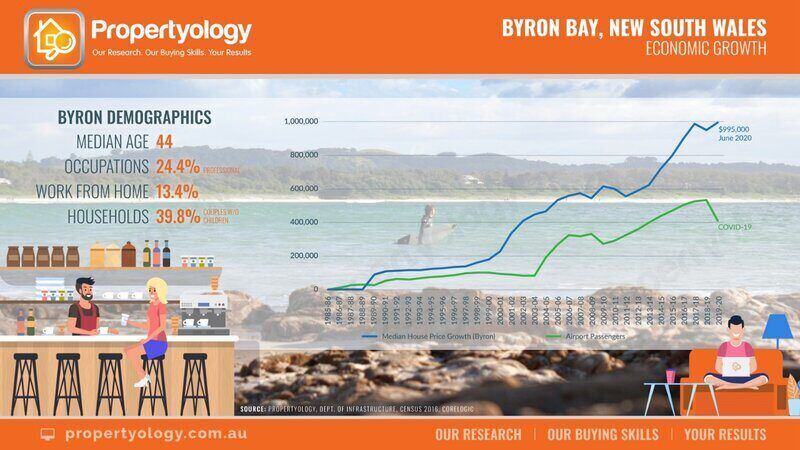 Mr Pressley said the key location criteria for WFH was a relaxed lifestyle, coupled with two-hour access to capital cities by car, plane, or train.

Other locations with a high portion of WFH at the 2016 census were:

Propertyology found other locations with WFH appeal included Orange, Cessnock and Albury (in NSW), Cairns, Townsville, Hervey Bay and Yeppoon (in QLD), Kingscliff and Batemans Bay (in NSW), Bendigo and Warrnambool (in VIC), Hobart and Launceston (in Tasmania), and Geraldton (in Western Australia).

What's the scope of the WFH phenomenon?

With millions of Australians forced to WFH in the last six months, Mr Pressley said the scope of the shift was considerable.

"That would mean that, in a country with 10.5 million households, 1.3 million people would be earning their income with ‘home’ being their workplace.”

He conceded WFH wasn't for everyone, but predicted some people would adopt it as their new normal.

“Some will go one-step further and move town to do it from their dream location. Some have already done it!”

Propertyology pointed out 46% of the 13 million strong Australian workforce could WFH with little to no impact on their performance.

He added, unless you were living under a rock it was obvious there would be "a transference of housing demand away from congested and expensive capital cities and towards more relaxed parts of regional Australia".