Figures released by the ABS today show that snap lockdowns across Australia impacted construction in key areas such as NSW, with overall construction completed up just 0.8%.

In the first quarter, the construction sector was propped up by government incentives such as Homebuilder.

The pipeline of work approved is starting to filter through to completions data, as slabs are laid and houses are built, with many construction companies facing lengthy lead times.

This is due to material shortages and snap lockdowns affecting work, according to Westpac senior economist Andrew Hanlan.

"Looking ahead, after the economy reopens, a pipeline of work will support home building activity near-term. Housing is responding to record low rates, the HomeBuilder program and a shift in spending to renovations with the national border still closed," Mr Hanlan said. 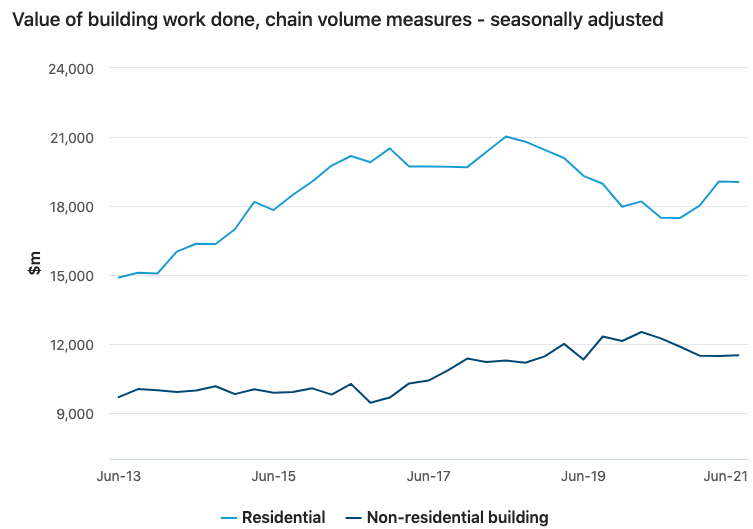 The Housing Industry Association (HIA) pointed out that construction of detached homes is at a record high.

"Figures released by the ABS today show the value of work done on detached houses surged in the June quarter to reach the highest level on record," HIA economist Angela Lillicrap said.

"HomeBuilder and low interest rates have been a key driver of the record volume of detached home commencements. This elevated volume of work is occurring across all regions."

Despite the increase in detached houses being constructed, Ms Lillicrap also said that many face delays in construction completion.

"At the same time, fewer houses are reaching completion in the normal construction timeframes as the industry is pushed with access to labour and material shortages."

A HIA report predicts there will be 135,390 detached dwellings started nationally in 2020-21, a growth of 32.5% over the previous financial year.

This is a record for the number of starts in a one-year period.

With detached starts in the 2021 calendar year to exceed 143,100, HIA believes this record unlikely to be broken in the next decade.

The data suggests that maintaining the construction rate from Homebuilder was never going to be possible and HIA's latest report predicts construction will start to feel the pinch from June 2022.

A negative indicator for GDP?

The 'soft' overall construction results could weigh heavily on Gross Domestic Product figures for the second quarter - due for release next week - according to ANZ senior economist Catherine Birch.

"We won’t see a repeat of the boost to GDP growth from residential investment that we saw in Q1," Ms Birch said.

"Capacity constraints may be playing a part, with NAB's Q2 business survey reporting construction capacity utilisation at a post-GFC high of 86.3%.

"But interestingly, hours worked in the construction industry remained well below their pre-pandemic level in May."

Ms Birch also pointed out that much of the growth in construction completed was in the public sector.

"Activity will need to increase substantially over the next few quarters though if governments are to meet their ambitious infrastructure goals," she said.

Image by Marcel Strauss via Unsplash