According to the regular's findings, 361,522 solar systems were installed throughout 2021, but these numbers are expected to rise as homeowners claim their solar rebates over the next 12 months.

"Given the above, our current estimate for 2021 suggests the number of installations of rooftop solar PV to be approximately 380,000 with a combined capacity of 3.2 gigawatts," a Clean Energy Regulator spokesperson said.

The capacity of these solar systems reached a record 3,002 megawatts (MW) according to the latest data, but this is also expected to climb. 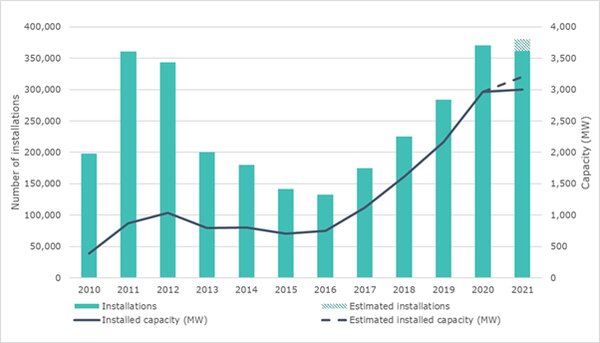 Size of solar systems on the rise

Australia is already leading the world in rooftop solar installations, not only in terms of installations but also the size of the systems.

The bulk of solar systems installed under the SRES are in the five to 10 KW bracket, but figures are showing the tides are starting to shift.

Image by Bill Mead on Unsplash