The Fair Work Commission (FWC) has announced it will raise the national minimum wage by 2.5% which will come into effect from 1 July.

It means Australia's lowest paid full-time workers will receive an extra $18.80 per week, or 49 cents an hour.

The minimum wage increase also applies to related award minimum wages, and will be rolled out in three stages.

Most employees on award rates or the national minimum wage will see a bump in their pay from 1 July.

Retail award workers will have to wait until 1 September before their wages rise, while workers under fitness, tourism, aviation, and other sector awards won't see a pay increase until 1 November.

The 2.5% increase falls short of unions' hopes of a 3.5% rise, but is an improvement from the 1.75% increase handed down at the peak of the pandemic.

"There was a broad consensus in the submissions before us that the current performance of the economy has exceeded expectations and that the economic recovery was well underway."

Despite hopes of a 3.5% rise, Australian Council of Trade Unions (ACTU) Secretary Sally McManus declared the 2.5% increase a win but expressed her disappointment that the wage rise has been delayed for some workers.

"This wage increase has come about because of unions, the Morrison Government and big business wanted pay cuts or freezes," Ms McManus said.

"However, it is extremely disappointing that the Commission has delayed increases for any workers – but especially those who have worked throughout the pandemic and whose employers have posted record profits."

The FWC declared there were "exceptional circumstances" justifying the September and November delay for some award workers.

Australians $11,500 out of pocket after worst decade of economic growth since 1950s

While the minimum wage increase may be good news to some, Australians' average incomes should be a tenth, or $11,500 higher, if the economy had maintained its pre-2012 growth over the last decade.

Research released on Thursday by the Productivity Commission revealed the past decade of economic growth has been the slowest in at least 60 years, in terms of GDP per capita and income per person. 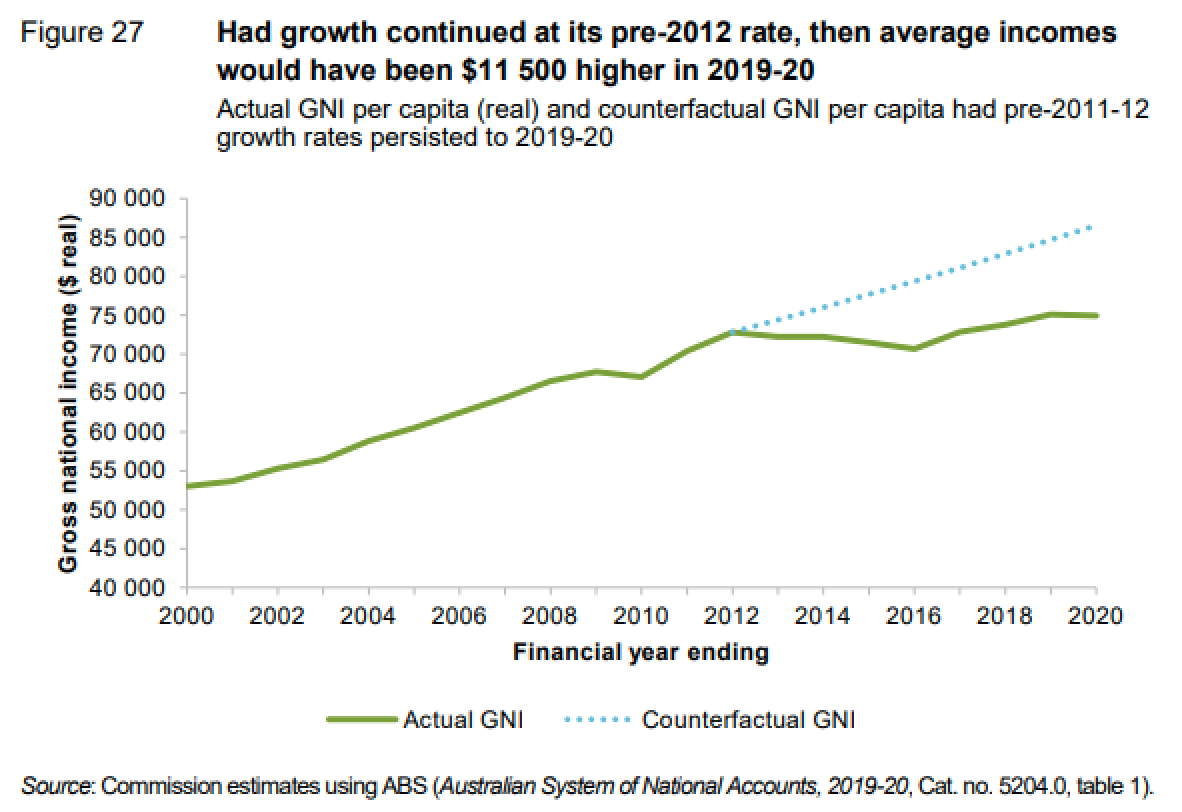 Even if the latest year of data removes COVID impacts, the last nine years are still the worst period of economic growth since the '50s.

Commission chair Michael Brennan said the slowdown in growth in Australia is consistent with a global slowdown that started in 2005.

"Indeed, Australia’s slowdown in productivity is actually less pronounced than that experienced in most other advanced economies, and for a time its effects on living standards were masked by the mining investment boom," Mr Brennan said.

"Nonetheless, the effect has been to contribute to a slump in growth in living standards.

"Considering that Australia’s poor economic performance in the 1970s was a key justification for the economic reforms of the 1980s and 1990s, the fact that the last decade of growth was even worse warrants further reflection."

The report also touched on the implications of working from home on productivity and wellbeing.

"On the one hand, employees regain the time that would have been spent in transit in additional time outside of work," Mr Brennan said.

"If as a back-of-the-envelope estimate, one takes the average travel time of 56 minutes per day and multiplies by the median wage, this equates to $34 worth of additional time per employee per day.

"This would lead to much higher wellbeing but no measured productivity improvement. Alternatively, if it leads to additional hours of work, output will grow; the effects on productivity are still unclear."

Photo by PEIXIN WU on Unsplash