86 400 has dipped its toes into the energy comparison world, without requiring customers to manually input data.

The latest offering from the neobank is designed to allow customers to identify and switch to a better electricity deal, without having to manually input their previous bill or any other data.

It's the first of its kind in the Australian banking sector, by a bank launched five months ago, is called 'Energy Switch' and will launch in February.

“Our Energy Switch service delivers on our purpose to help Australians take control of their money  – prompting them to find a better energy deal and save time and money in the process," 86 400 CEO Robert Bell said.

"This isn’t about us making commission on the switch, but about giving customers the best independent analysis of their electricity bills. No ifs, buts or kick-backs.”

86 400 will not take any commission from customer switches.

"Once a customer submits their electricity bill to 86 400, over 200 data points on that bill are analysed through the Accurassi database."

The app will allow customers to not just compare energy tariffs, but also receive a detailed assessment on the best plan for them, based on their usage.

The app will operates under a three-step process - 'Send, Select, Switch' - where customers send the app their latest bill, it provides details of three competitive electricity plans, and customers can then select from those three plans (an illustration of the app can be seen below).

“Australia doesn’t need another bank if it’s the same as all the others," Mr Bell said.

"We’ve put customers first, every step of the way, with smart products and features you might not expect from a bank.”

86 400 is an online-only bank, and was launched in September 2019, obtaining its ADI in July 2019, and is backed by banking payment and services provider Cuscal.

Its name refers to how many seconds there are in a day. 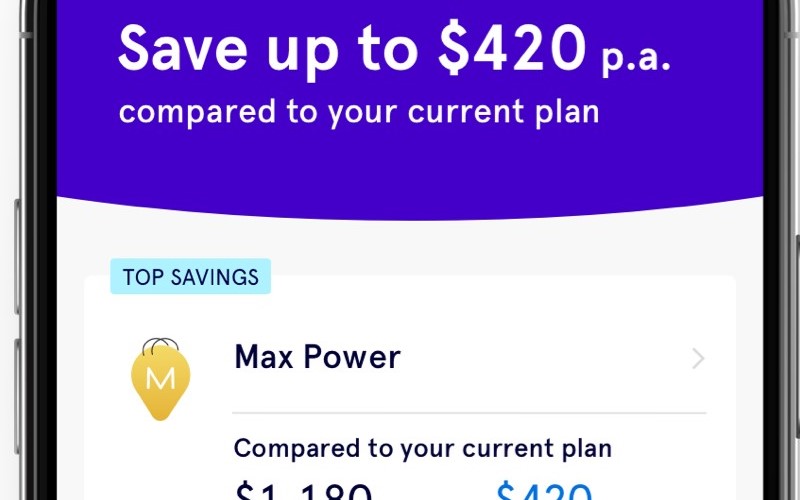 86 400's app announcement comes after the ACCC reported in December that Australian households are paying 20 per cent more for electricity than they were a decade ago.

While average household bills dropped to $1509 in 2018-19, households were paying $254 more than in 2007-08, ACCC's report found, and that the average price for a unit of electricity drawn from the grid was about 45 per cent higher in real terms.

“There is still work to be done to make electricity more affordable for households,” ACCC Chair Rod Sims said.

“Households can find an even better deal by shopping around and looking at the offers of some of the smaller retailers in the market."