Despite proclamations of a strong economic recovery, inequality has been massively exacerbated by the COVID-19 pandemic, a new report shows.

Reports by Oxfam both globally and for Australia, titled The Inequality Virus, show the wealth of the world's billionaires increased by $US3.9 trillion between March 18 and December 31 2020, recovering all losses made in the early months of the pandemic and then some.

But with the pandemic creating the world's worst jobs crisis in almost 100 years, it could take the world's poorest people more than a decade to recover the losses they sustained.

With hundreds of millions of jobs lost around the world - many of which belong to low-income earners and those in insecure employment - the report highlights that as many as 501 million people could be living on less than $5.50 a day. 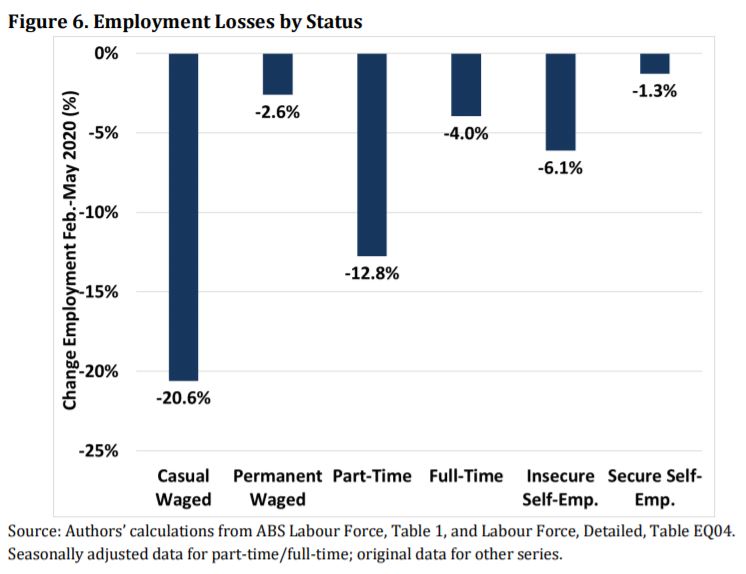 This applies in Australia too. Source: The Australia Institute

"The coronavirus pandemic has the potential to lead to an increase in inequality in almost every country at once, the first time this has happened since records began. The virus has exposed, fed off and increased existing inequalities of wealth, gender and race," Oxfam said.

"The economic fallout from the COVID-19 pandemic could push half a billion more people – or 8% of the global population – into poverty unless urgent action is taken to support developing countries.

"There can be no return to where we were before. Instead, citizens and governments must act on the urgency to create a more equal and sustainable world."

In Australia alone, 31 billionaires have seen their fortunes increase by nearly $85 billion since the pandemic was declared, which according to Oxfam is enough to give the 2.5 million poorest Australians a one-off payment of just over $33,300 each.

This follows data from the Australian Bureau of Statistics in December that showed while our average household wealth hit a new record high of $441,649 per person, most of this is tied up in housing, and the highest 10% of households by wealth owns nearly half of all household wealth.

“As hundreds of thousands of people were losing their jobs and entering an incredibly unstable employment market, this small group of elite Australians saw their incomes recover very quickly, before beginning their upwards trajectory once more,” Ms Morgain said.

With a potential unemployment rate as high as 12% (but an official rate of 6.6%), Australia's economic recovery from the virus has been heralded.

Treasurer Josh Frydenberg for example said 90% of those who lost work or hours at the start of the crisis were now back to work.

The latest job numbers are very encouraging & another indication that Australia’s economic recovery is well underway.

With the creation last month of 50,000 new jobs, 71% of which were full time, the unemployment rate has fallen to 6.6%, beating market expectations.

But other signs aren't so promising: 1.5 million people are still on unemployment benefits, part-time and gig-economy work has outpaced the recovery of full-time work, and the youth unemployment rate remains high at 13.9%.

Ms Morgain said the deep divide between the rich and poor is proving as deadly as the virus. 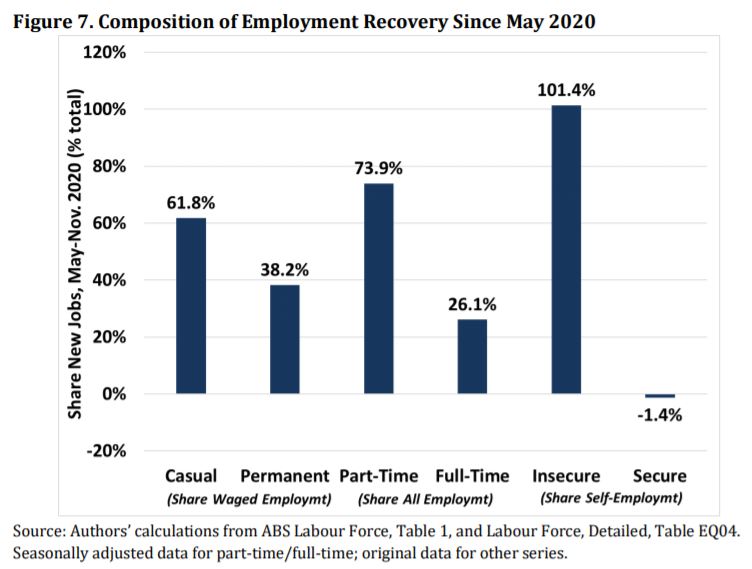 "To be sure, Australia has done better than many other countries in addressing the health challenges of the pandemic. This sets the stage for continuing economic recovery," The Australia Institute's Dan Nahum & Jim Stanford said in a research paper.

"Nevertheless, the continuing economic hardship resulting from the pandemic and the partial recovery since May must be addressed with ambitious, active policies: both to support a rebound in the quantity of employment, and also to support improvements in the quality of jobs."

Ms Morgain said the Federal Government’s reduction of the JobSeeker supplement this month was devastating.

“While the Government should be congratulated for acting quickly to implement wage subsidies and other social protection measures last year, the inappropriate and unfair reversal of the increase to JobSeeker payments is a cruel blow to the poorest Australians and, according to unions, has left 1.4 million people living on as little as $51 a day,” she said.

More than 3.24 million people in Australia (13.6% of the population) currently live below the poverty line, including 774,000 children.

An extra few hundred thousand are expected to get there once elevated income support ends.

“The fight against inequality and poverty must be at the heart of economic recovery efforts," she said.

"Our Government must invest in public services and low carbon sectors to create millions of new jobs and ensure everyone has access to a sustainable social welfare safety net, and they must ensure the richest individuals and corporations contribute their fair share of tax to pay for it."

Savings.com.au has contacted the Department of Social Services for a reply.

Photo by Andreea Popa on Unsplash