Strong increase in jobs and hours worked, despite slight rise in unemployment Australia's unemployment rate has risen to 7.0% in October, from 6.9% in September, seasonally adjusted, with 25,500 jobs lost in the month.

The figures from the Australian Bureau of Statistics (ABS) were close to forecasts with the consensus among economists being there would be a rise to 7.1%.

However, demonstrating the current volatility of the labour market, the distribution of economists forecasts ranged from a loss of 80,000 jobs, to 63,000 jobs added.

Bjorn Jarvis, head of Labour Statistics at the ABS, said the figures were promising, especially in Victoria.

"This strong increase means that employment in October was only 1.7% below March, and reflects a large flow of people from outside the labour force back into employment," Mr Jarvis said.

“Encouragingly, the rise in employment was also accompanied by a strong rise in hours worked, particularly in Victoria, where hours increased by 5.6%.”

Since starting to ease restrictions in October, Victoria’s employment increased by 81,600 people (2.5%).

Employment and hours worked in Victoria remained 4.1% and 9.0% respectively below March levels (compared to 1.7% and 3.8% for the rest of Australia). 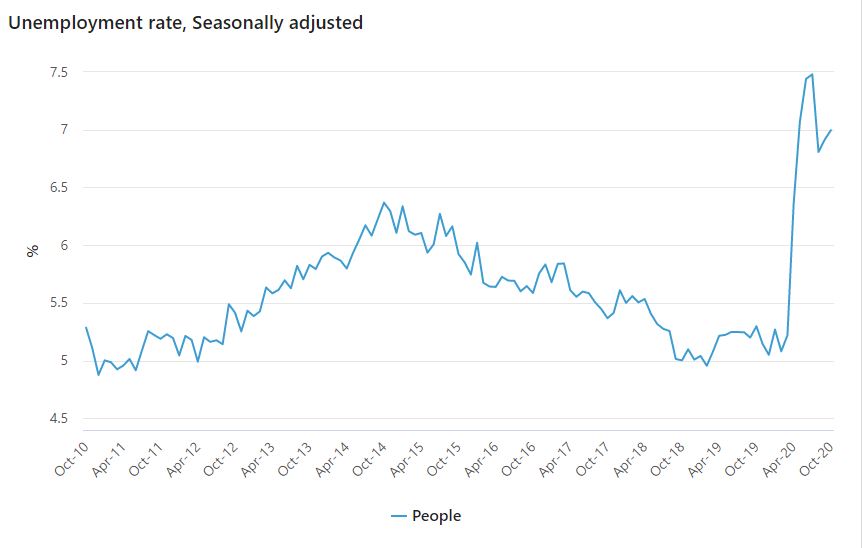 The participation rate increased by 0.9% in October to be almost at pre-COVID levels.

“The number of people actively looking for work and who were available to start work increased in October,” Mr Jarvis said.

“Coupled with a strong increase in employment, the participation rate increased by almost a whole percentage point in October to be just 0.1 percentage points below March. “

The Victorian unemployment rate increased by 0.7 percentage points to 7.4%.

The youth unemployment rate increased to 15.6% from 14.6% as JobKeeper eligibility was tightened, but there was also an increase of 36,700 jobs for young people.

Westpac economist Justin Smirk said the jump in employment and participation was unexpected, especially the latter, which sits at pre-COVID levels.

"This is not something we expected to see so soon but in all fairness, we have been arguing that participation has been very dynamic with employment this time so it should not be surprising that a strong rise in employment has been associated with a strong gain in participation," Mr Smirk said.

"But it does raise the question, can we see a new record high in participation sometime in the next year, not something we had expected to see, which can hold unemployment around 7% even if we get stronger than expected employment gains?

"And how much will it dip if we get a soft patch though 2021 preventing a meaningful rise in unemployment?"