With no end in sight to lockdowns, Sydney's weekly spending is at its lowest point since April 2020, according to ANZ.

Spending is at its lowest level since the first JobKeeper and JobSeeker supplements were rolled out.

ANZ economists said Sydney residents have reined in spending due to uncertainty around employment and deteriorating economic conditions off the back of the latest lockdowns.

The long-term course of the pandemic has also had a negative effect on spending, with non-food retail hitting its lowest level since April 2018.

In addition, the lockdowns in both Sydney and Melbourne are having a "substantial impact on domestic tourism flows", according to ANZ economists. 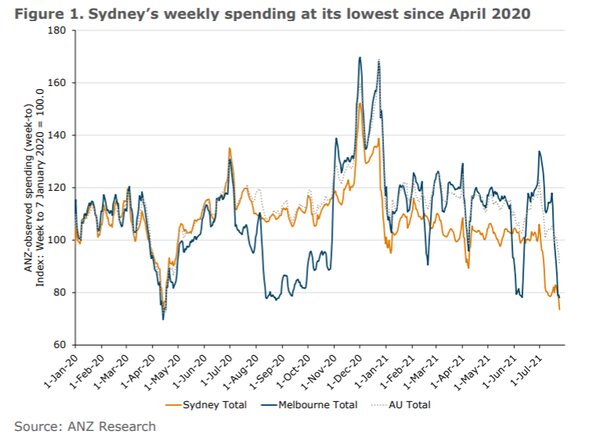 According to ANZ-observed spending, Sydney's travel/movement spending hit its lowest point since May 2020, with national spending the lowest it had been since June 2020.

Additionally, dining and takeaway spending hit its lowest since April 2020, with national dining spend at the lowest point since mid-May 2020.

In Sydney, grocery spending is also at the lowest point since the pandemic began.

Entertainment spending in Sydney hit its lowest amount since June 2020, which has almost halved since the most recent lockdown began.

ANZ research also found that people are spending less on cinemas and bar or club outings across the country.

A temporary increase in demand for electronics and furniture was also observed in June 2021, though there was "no major rush".

Image by Ethan Lee on Unsplash