Photo by Christina Hawkins on Unsplash

A survey released yesterday reveals 29 out of the 44 top economists in Australia oppose increasing the superannuation guarantee to 12%.

The increase to the superannuation guarantee (SG) to 10% is legislated for July 2021, but a survey by The Conversation and the Economists Society of Australia reveals 29 out of 44 economists said now's not the time for an increase.

Thirty agreed that increases in the SG would be paid for via slower wage growth, which turned negative for the first time in 20 years by some measurements.

Rates based on a savings balance of $10,000. Introductory bonus interest rate products not included. Sorted by total interest rates. Refer to providers' websites for bonus rate conditions. Rates correct as of May 26, 2022. View disclaimer.

Of the economists who said an increase to the SG should be deferred or scrapped, primary reasons given include that it would affect wage growth, and would stymie the cost of hiring and the raise labour costs.

The survey comes after Grattan Institute modelling in February found increases to the SG affected wages and wage growth.

It analysed data on 80,000 federal workplace agreements from 1991 to 2018 and found 80% of the cost of increases in super is passed to workers through lower wage rises.

The University of NSW business school's Nigel Stapledon, one of the supporters for scrapping the SG increase, said it is of "minimal value" to low-income households.

"The super scheme has been good for full-time, high-income workers but has not met, and cannot by design, meet the needs of low-income and part-time workers," he said.

"For high-income earners, who would naturally save more, this merely accounts for some of their planned saving with a tax benefit thrown in.

Of the supporters for the increase to proceed as planned, Australian National University's Emily Lancsar said while it is an "effective" way to save money, she did agree that increases in super contributions are likely paid for in slower wage growth.

Of those who called for a deferral, The University of Melbourne's Kevin Davis said a "deferral makes sense" in the present economic crisis.

"In a likely situation of higher unemployment for some time when the supply of labour is likely to be relatively elastic, some part of the higher superannuation contributions could be expected to be reflected in lower wages growth," he said. 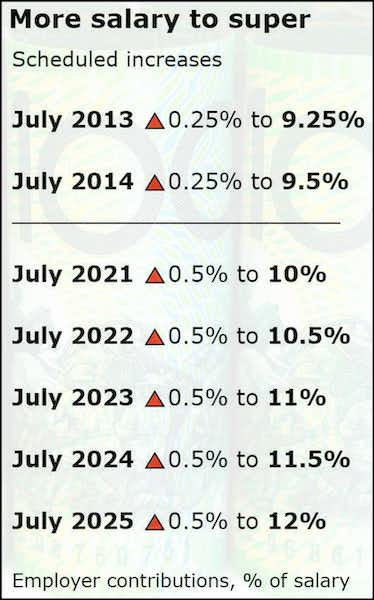 Tax returns to be piled into super, savings

A recent survey by ME Bank reveals 18% of respondents said they would invest this year's tax returns, for example in shares or contributing to superannuation.

Just over one fifth also said they are planning to spend it on discretionary items, such as eating out, new clothes or shoes, or a holiday.

“Ideally, you’d have emergency savings to cover at least six months of expenses, but even having a small stash of cash can help you weather life’s unexpected events or outlays," he said.

“Using a tax refund to grow your retirement savings is also a smart move. Given the power of compounding returns, the more you contribute now to super the more you’ll have for retirement.”

ME also found 57% of Australians found the tax return process has become more complex as a result of COVID-19, with 55% saying they are "more likely" to seek expert advice for this year's tax return.

Data from the Australian Tax Office for the 2016-17 financial year revealed the average tax refund was $2,572, across 10.8 million lodgers who received a return.