Entertainment spending is increasing as we re-emerge from the pandemic Photo by Harpal Singh on Unsplash

The latest data from the Commonwealth Bank Household Spending Intentions (HSI) series for October shows a sizeable increase in spending intentions for entertainment purposes, such as streaming, gaming or sports.

However, the entertainment sector was still lagging somewhat when it came to art and galleries, live music and movie theatres.

Retail spending intentions continued to soften after some increases in previous months.

There were some improvements in spending intentions on categories like grocery stores, department stores, furniture and office supplies as well as clothing stores, while weaknesses were evident in men's clothing, women's accessories and health and beauty spas.

According to Mr Halmarick, October's mixed spending intentions are a result of the drag caused by Victorian shutdowns on the economy.

“Notwithstanding this mixed result, other data points to an improvement in the Australian economy in the early stages of November," he said. 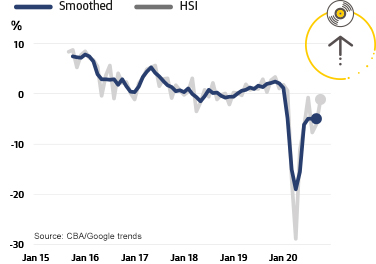 To boost spending, the New South Wales Government today announced it would be giving $100 dollars worth of vouchers to every adult to kick start the struggling hospitality and entertainment sectors.

"We want to encourage people to open up their wallets and contribute to the stimulus effect," NSW Treasurer Dom Perrottet told the ABC.

"The dining and entertainment industries were among the hardest hit by the pandemic and I would encourage people to utilise this scheme once it is up and running and to make sure they spend a bit extra on the way through, too."

"The November easing of monetary policy has led to a further reduction in a number of fixed mortgage rates," CBA's report said.

"We expect these low interest rates to continue to provide support to home buying."

Base criteria of: a $400,000 loan amount, variable, fixed, principal and interest (P&I) home loans with an LVR (loan-to-value) ratio of at least 80%. However, the ‘Compare Home Loans’ table allows for calculations to be made on variables as selected and input by the user. All products will list the LVR with the product and rate which are clearly published on the Product Provider’s web site. Monthly repayments, once the base criteria are altered by the user, will be based on the selected products’ advertised rates and determined by the loan amount, repayment type, loan term and LVR as input by the user/you. *The Comparison rate is based on a $150,000 loan over 25 years. Warning: this comparison rate is true only for this example and may not include all fees and charges. Different terms, fees or other loan amounts might result in a different comparison rate. Rates correct as of June 30, 2022. View disclaimer.

ANZ meanwhile recently retracted its prediction of house price falls in 2021, instead expecting a 9% rise in capital cities next year, indicating increased confidence in the market.

“Spending on CBA credit/debit cards has picked up as the Victorian economy opens up. In addition, low interest rates are encouraging an increase in home loan applications, especially for fixed-rate mortgages by owner-occupiers," Mr Halmarick said.

"A stronger housing market should support spending intentions in the months ahead – as should the recent significant easing of monetary policy by the Reserve Bank of Australia."

“The Government’s fiscal support packages were designed to keep as much of the economic furniture intact so that when restrictions were eased activity could rebound swiftly," Mr Aird said.

"It is clear that the economic data at the national level has improved since the middle of the year. Indeed we expect a decent bounce in GDP over the second half of this year to show up in the Q3 20 and Q4 20 national accounts.

“Provided transmission of COVID-19 in Australia remains low, particularly community transmission, the strength of the economic recovery in 2021 will surprise many."