Photo by Buddhika Dissanayake on Unsplash

ANZ has revised its house price forecasts and expects the market to rebound strongly next year.

The big four bank forecast October 2020 would mark the bottom of the price cycle and next year would see gains of around 9% across the capital cities.

Melbourne is expected to lag behind the other capitals, posting growth of 7.8%.

ANZ economists said the market had proven more resilient than expected and driven by owner-occupiers and first-home buyers, was turning a corner.

"Our view that house prices would decline around 10%, peak to trough, has proven too pessimistic: low rates have trumped factors like elevated unemployment and low population growth," economists Felicity Emmett and Adelaide Timbrell said.

"Government income support and the deferral of home loan repayments have also helped support the market.

"The RBA’s [Reserve Bank] recent rate cut, the further decline in fixed mortgage rates and the prospect of low rates for some years will all add to the momentum currently in the market." 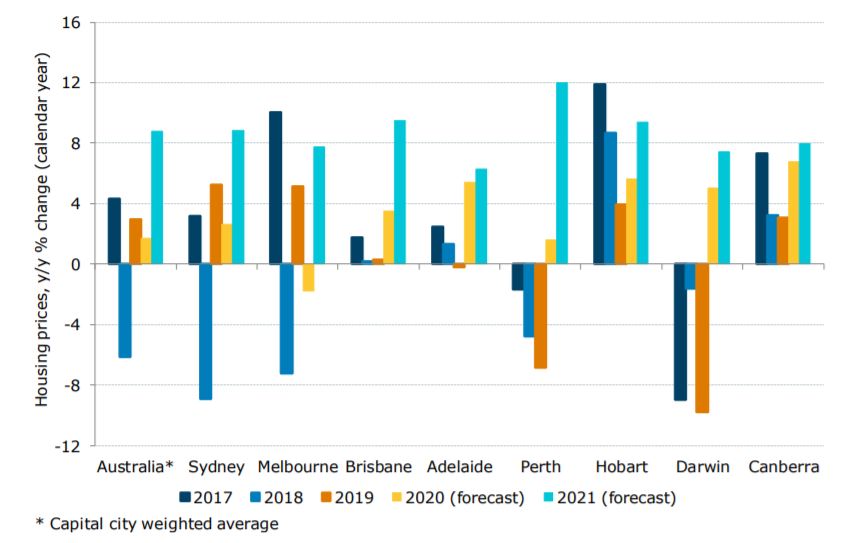 They added house price gains could be even greater should there be a successful vaccine available at the start of the year.

"An early vaccine rollout and the resulting lift to sentiment could drive larger price gains than we currently anticipate."

"That said, we think regulators would be quick to step in with macro-prudential measures if the market looked to be overheating."

ANZ said rental markets were also turning, but lagged some way behind the buyers' market.

ANZ's economists said although housing debt was up, so were savings, which would offset the forecast spike in the unemployment rate.

"While high housing debt may pose a risk next year in light of expected higher unemployment rates, the spike in household savings in Q2, particularly by indebted owner-occupiers, suggests many households have increased their mortgage buffers," they said.

"On average, owner-occupiers were less likely than renters to lose income and employment through the pandemic downturn."

According to ANZ, this was likely to offset the marginal rise in housing arrears, which at 1.2% is only 0.2% higher than September last year.

"ANZ 90+ day arrears data show that Victoria and NSW arrears rose modestly between March and September, but arrears rates in other states have declined through the same period."

"RBA research suggests that housing arrears could rise to 2% as mortgage deferrals expire and unemployment continues to rise.

"Our view is that accommodative lender measures and a lower peak in the unemployment rate will mitigate this risk."

ANZ said the Federal government's HomeBuilder scheme had been a success as approvals for houses and renovations had risen sharply.

"Fiscal stimulus is having an impact. Approvals have risen 27% over the past three months, helped by the HomeBuilder scheme which is supporting the detached house building sector," the authors said.

Western Australia, which had additional state grants, has seen a 77% jump in approvals in the three months to September, and Queensland also posted strong growth (+38%).

A recent ANZ survey showed 61% of respondents operating in the residential sector expected the HomeBuilder program to have a positive impact on their business, while 75% of developers expected a positive impact (up from 70% in the previous survey). 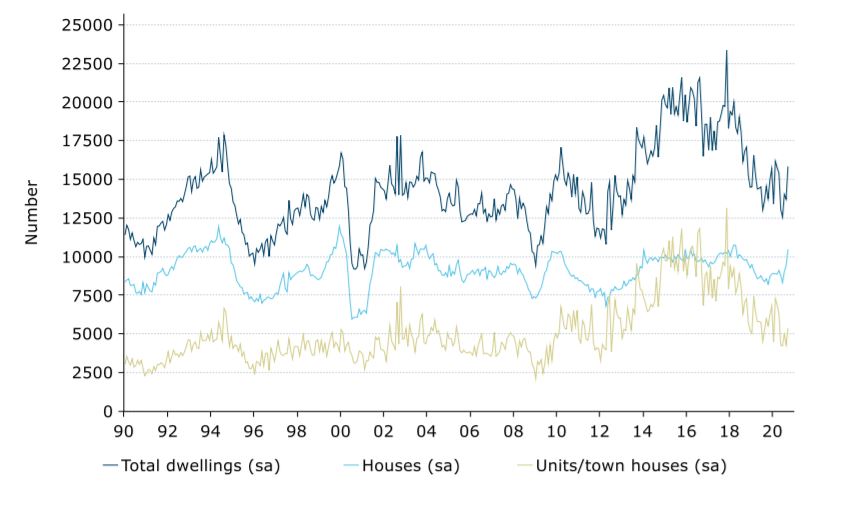