Photo by Nicolas Gonzalez on Unsplash

The value of new loan commitments for housing spiked again in August, up 12.6% (seasonally adjusted), the largest month-on-month rise in the history of the series.

That's according to the Australian Bureau of Statistics (ABS) Lending Indicators data for August, released today.

“The value of owner occupier home loan commitments was $16.3 billion in August, the highest value in the history of the series," Ms Seneviratne said.

"August’s 13.6% increase in the value of owner occupier home loan commitments is the largest month-on-month rise in the history of the series, eclipsing the previous record of 10.7% set in July.”

Ms Seneviratne said borrower behaviour and lender processing times have been strongly impacted by the COVID pandemic, and the pent-up demand is influencing the month-on-month figures.

“Lenders are reporting to us that current processing times mean that August commitments reflect customer demand in June and early July, prior to Victoria imposing stage 3 and stage 4 restrictions," she said. 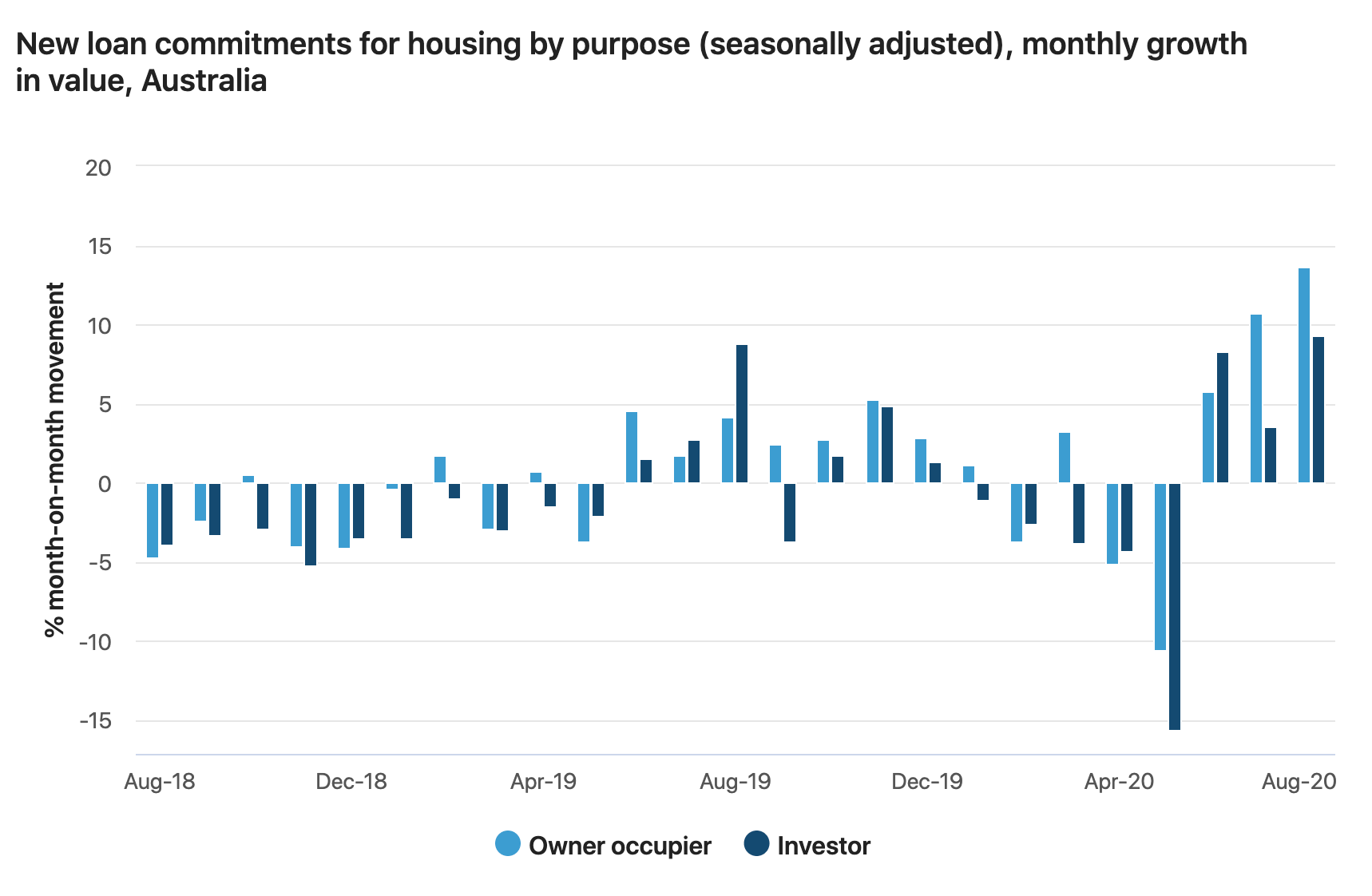 According to the ABS statistics, the number of owner occupier first home buyer loan commitments rose 17.7% to reach the highest level since October 2009.

“New loan commitments for owner occupier housing rose in all states and territories, except the Northern Territory. The largest increases in the value of new loan commitments were in Victoria, Queensland and New South Wales”, Ms Seneviratne said.

The value of loan commitments for investor housing rose 9.3% to $5 billion.

It comes after Treasurer Josh Frydenberg announced the government will relax tough lending laws to make it easier for Australians to get a mortgage.

Under the changes, the onus will shift to borrowers to be honest about their ability to service a loan.

Speaking of the changes at the time, Frydenberg said they will remove a lot of red tape.

"As Australia continues to recover from the COVID-19 pandemic, it is more important than ever that there are no unnecessary barriers to the flow of credit to households and small businesses," Frydenberg said.

"Maintaining the free flow of credit through the economy is critical to Australia's economic recovery plan."

But consumer groups were quick to slam the announcement, arguing they could leave the economy with more household debt.

It comes off the back of the Federal Government announcing it would extend the First Home Loan Deposit Scheme by allowing an additional 10,000 first home buyers to enter the scheme from October 6 until June 30, 2021 on the condition they purchase a new build.

Half of low-income renters now in rental stress: Productivity Commission