Photo by Becca Tapert on Unsplash

One-eighth of all first home buyers who purchased a home between March and June 2020 did so using the First Home Loan Deposit Scheme, a new report shows.

Roughly 12.5% of all homes purchased by first home buyers during the pandemic's peak months were done so utilising the scheme, according to the scheme's administrator the National Housing Finance and Investment Corporation (NHFIC).

The first home loan deposit scheme (FHLDS) was launched on January 1 2020 by the Federal Government to help first home buyers secure a home loan with a deposit as little as 5% while avoiding the high cost of Lenders Mortgage Insurance (LMI).

A new report by the NHFIC said the scheme has supported many younger buyers, but also some older cohorts.

"The Scheme has had broad geographical reach supporting first home buyers across the country with strong interest from buyers in outer metropolitan and regional areas," the report said.

"First time buyers have been able to bring forward their home purchases in line with the objectives of the Scheme. FHLDS has now cemented itself as part of the first home buyer support policy architecture."

The scheme may have helped increase first home buyers' share of the market, with CoreLogic's head of research Eliza Owen last week reporting first home buyers made up 29.5% of all owner-occupier commitments in June, far above the 23.2% decade average.

"The expansion of the first home loan deposit scheme and other first home buyer incentives announced over June and July is likely to see a boost in first home buyer participation over the second half of 2020," Ms Owen said.

According to the NHFIC report, purchases made using the scheme enabled applicants to shave an average of four years (52 months) off their home purchase, mainly by avoiding a 20% deposit.

Applicants in NSW saved nearly five years (57 months) and $65,221 in deposit savings, while applicants in the Northern Territory saved the least at 39 months (3.5 years), still a substantial amount of time.

The report also found that two out of every five applicants who accessed the FHLDS also used other government incentives, such as the First Home
Owner Grant (FHOG) and the Commonwealth Government’s First Home Super Saver Scheme (FHSSS).

Of all FHLDS applicants, 14% received a FHOG from their state or territory, around 4% accessed the FHSSS, while as many as 40% also received stamp duty concessions.

The scheme can also be used in conjunction with the new HomeBuilder scheme for those buying or building new properties.

Building a home? The table below features construction home loans with some of the lowest variable interest rates on the market for owner-occupiers.

Who is applying using the scheme?

The report also found that one in six (1,804) first home buyers accessing the scheme belong to key worker groups on the 'front lines' of the COVID-19 pandemic, such as teachers (37%), nurses (25%) defence personnel, firefighters and police (13%) and childcare workers (10%).

The median applicants for both singles and couples were in the 25-34 age bracket, although 10% were over 40, and both bought 95% loan-to-value-ratio (LVR) homes in line with the scheme's design. 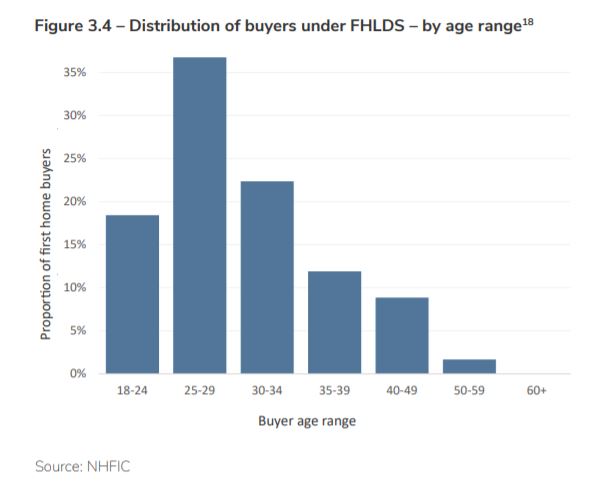 Where are applicants buying?

The FHLDS has supported first home buyers across all states and territories, mostly in line with residential population density: 62.3% of buyers purchased in major cities and 37.7% purchased in regional areas, compared to 32.3% of the population living regionally.

Scheme guarantees were mostly concentrated in NSW (2,263), followed by Queensland (1,845) and Victoria (1,617), and eight out of 10 loans guaranteed under the scheme were in these three states.

Distribution of guarantees under the Scheme compared with population 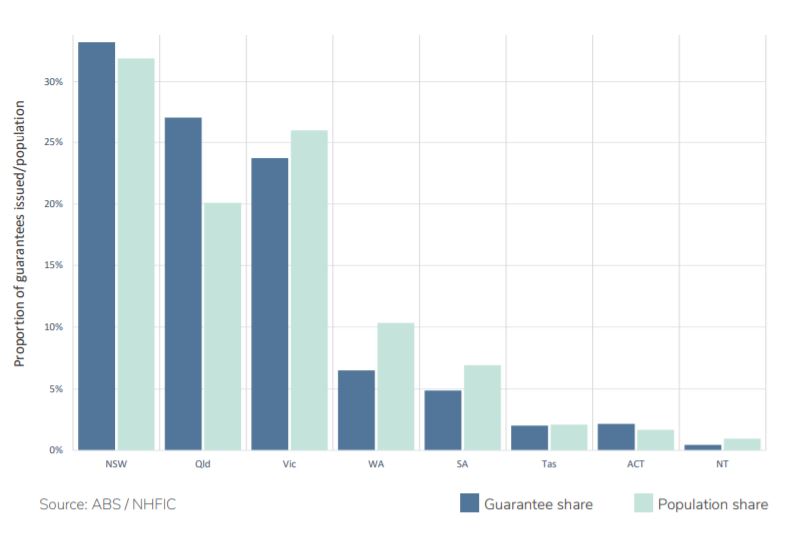 By area, demand for the Scheme was highest in the Toowoomba area, in regional Queensland, with 70 loans guaranteed in that area.

Demand was also strong across South Western Sydney (Campbelltown area) and the outer suburbs of Melbourne (Craigieburn and Frankston).

More than half of all purchases under the Scheme in capital city areas were between 15 kilometres and 30 kilometres from the nearest CBD, while almost a third of all single applicants purchased within 15 kms of the nearest CBD. 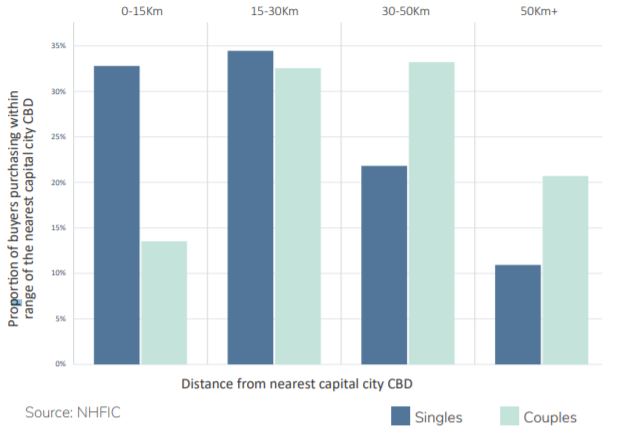 Almost 70% of all buyers using the scheme bought a house, while 25% bought an apartment and 5% purchased a townhouse.

Four out of five apartment purchases under the Scheme were in major cities, while house purchases were more evenly spread across major cities and regional areas.